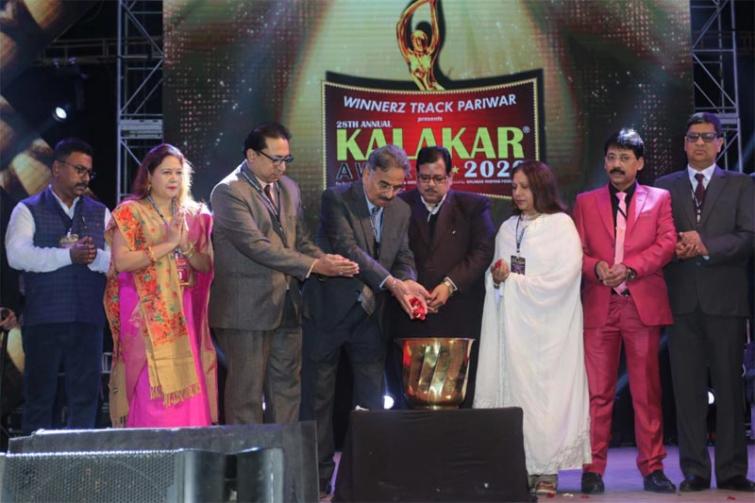 Kolkata/IBNS: Under the aegis of the Kalakar Parivar Foundation, the 28th edition of the Kalakar Awards, one of eastern India’s popular recognition of artists from various fields of entertainment, including cinema and television, was recently held in Kolkata.

Said Ashok Kalanauria, Founder & Chairman of Kalakar Awards, “Kalakar Awards is the only cinema, television and entertainment award that succeeded in breaking the barriers of borders, honouring stars from Tollywood, Bollywood and eminent personalities from Pakistan, Bangladesh and Nepal.”

The awards were divided in three categories – cinema, television and entertainment.

In the Cinema section, the Best Film award was shared by SUPER 30 (Reliance Entertainment) and Purbo Poschim Dokkhin Uttor Ashbei (by Suchandra Vaaniya).

Mrunal Thakur bagged the second award for Super 30 when she was declared the Best Actress, an honour she shared with Rukmini Maitra, who won it for her role in Password.

Talking of Super 30, Thakur said, “I want the film to reach as many students and teachers who want to give their best.”
Talking on the side lines of the event, she said she considered a particular remark by a fan as one of her crowning moments.

“How can you cry and smile at the same time?” the fan had asked, “I have only seen Smita Patil doing that.”

Said Mrunal Thakur, “I had tears in my eyes when I read that and I will never forget that.”

Ankush Hazra won the Best Actor award for his role in Bibaho Obhijaan.

Veteran actor Dhritiman Chaterji was honoured with the Living Legend award for his ‘invaluable contribution to Indian cinema’.
Tollywood actress and Member of Parliament Nusrat Jahan was awarded the ‘Youth Icon’ award.

The Kapil Sharma Show (Sony TV) was adjudged the Best Comedy Show and while Kiku Sharda from the show won the Best Comedian award.

Antara Biswas (Monalisa) of Nazar (Star Plus) was considered the Most Stylish Vamp.

In the Entertainment section, Kolkata’s heartthrob and singing star, Usha Uthup was honoured with the 50 Years of Stardom Award for her ‘Iconic Achievement and Contribution to Music for 5 decades’.

The veteran artist had the cheering crowd on their feet with the rendition of her popular numbers, ‘Hum Tumhare Hai Kolkata’ and ‘Dosto Se Pyar Kiya’.

Anu Malik won the Music Icon award for his ‘Iconic Contribution in the World Of Music’.

Singer and Parliamentarian Babul Supriyo secured the Achiever award for his ‘Contribution in the World of Music’.

Bickram Ghosh was adjudged the Best Music Director for his musical score in Basu Poribar.

Apart from the giving away of awards, there were also a host of live programmes, including dance performances by Crescendo Dance Company (choreographed by Debraj Ghosal- Debu), musical performances by Sonakshi Kar (of SA RE GA MA PA fame), Soumya Chakraborty (of Indian Idol fame), Rayan and others.

The show was compered by Sweta Tiwari and Isha Sharma.