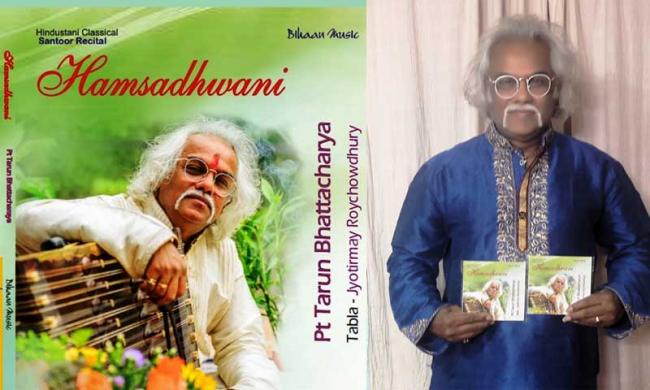 Hamsadhvani (meaning "the cry of the swan") also spelled as Hansadhwani, is a raga in Carnatic music (musical scale of Carnatic tradition of Indian classical music).

It is an audava ragam (pentatonic scale). It is a janya raga of the Melakartha raga, Dheerasankarabharanam (29th) but according to Hamsadhvani's prayoga or the way it is sung it is said to be the janya of Kalyani (65th). Hamsadhvani is also extensively used in Hindustani music and said to be borrowed into it from Carnatic music.

Pdt Tarun Bhattacharya said that he was delighted to have presented the album in an effort towards popularising classical music among the younger generation. He felt that Raga he chose was relatively easier for the young generation to understand and enjoy.

He also mentioned that his recent 2 months tour of USA has been an outstanding success towards raising funds for the underprivileged students across 800 schools in India. Tarun Bhattacharya Santoor’s sole disciple of Bharat Ratna Pdt Ravi Shankar belonging to Maihar Gharana.

He has invented “Mankas” (fine tuners) for fine tuning. He was the first musician to have ever glided notes or “meend” at the lower octave in 1980.