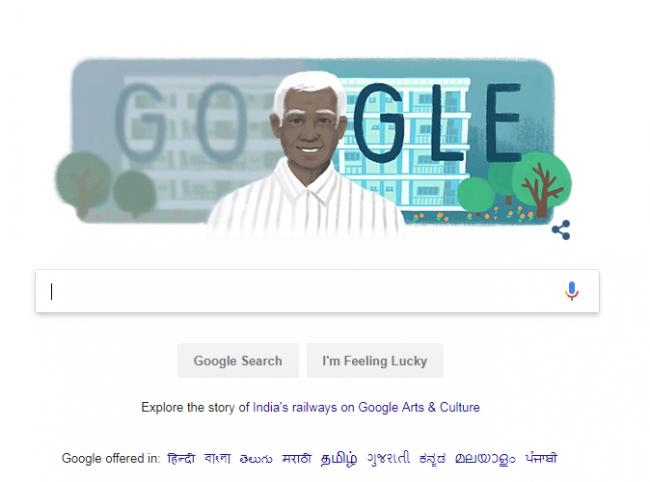 Known as Dr. V to colleagues and patients, Dr. Govindappa Venkataswamy, founded the Aravind Eye Hospital, which started as an 11-bed facility and has grown into a network of clinics providing life-changing care to citizens of a nation struggling with high rates of blindness.

Born on this day in 1918, Govindappa Venkataswamy was raised in Vadamalapuram, a rural village in Southern India.

He began his education at a school with no paper or pencils—spreading sand from the riverbank on the ground, students would write with their hands. From such humble beginnings he went on to earn a B.A. in chemistry from American College in Madurai, an M.D. from Stanley Medical College in Madras in 1944.

Facing mandatory retirement at age 58, Dr. V began the next phase of his career in 1976, establishing the GOVEL Trust in order to fund the first Aravind Eye Hospital.

The 11-bed facility was financed by doctors mortgaging their homes and donating their own furniture.

The vision was to devote six beds to those patients who could not pay anything and to cover those costs with the other five beds, serving patients paying only as much as they could afford.

Today Aravind Eye Hospital has nearly 4,000 beds performing over 200,000 eye surgeries each year, with 70% of patients paying little or nothing.

This seemingly miraculous result has been made possible by a relentless focus on efficiency and good management. Dr. V lowered the cost of cataract operations to nearly $10 per patient.

His team of paramedicals do most of the prep work required for each surgery, freeing doctors to do what they do best.

Each year Aravind performs 60% as many eye surgeries as the NHS in Great Britain, doing so at one-one thousandth of the cost.

Venkataswamy passed away in 2006.