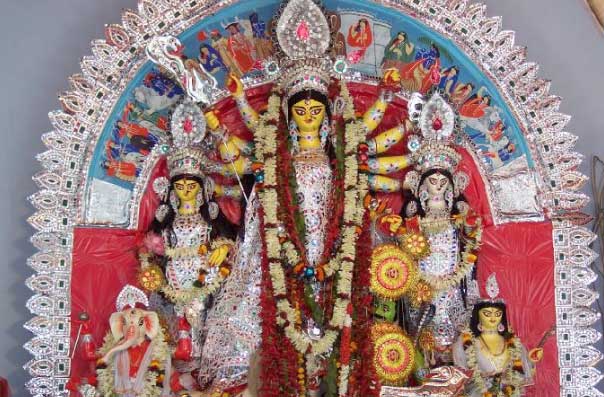 Bengal’s Durga is an exhibition which provides a rare insight into the outpouring of creativity, artistic innovation and cultural celebration of Bengal’s traditions. The 16 exhibition panels, with photographs by Manjit Singh Hoonjan, have been curated by Ali Pretty of Kinetika and Kamalika Bose.

The panels will be on display till Sept 30.

This exhibition is linked to the visit of an empowered delegation from the state of West Bengal, India, to cities in to the UK and the Republic of Ireland, seeking specific contacts and business meetings on festivals, community and employability-linked arts and crafts, creative industries with links to sustainable tourism.

The West Bengal delegation consists of Minister of State for Sports and Youth Services Laxmi Ratan Shukla and Atri Bhattacharya, IAS, Principal Secretary of Tourism. The delegation is in the UK till Sept 9.

This visit is on the back of a Memorandum of Understanding the British Council have signed in India with the Government of West Bengal on July 6 this year.

The exhibition has been put together by the Department of Tourism, Government of West Bengal in collaboration with the British Council, as part of its 70-year anniversary celebrations in India.

Minister of State for Sports and Youth Affairs, Laxmi Ratan Shukla said: “Durga Puja is a celebration of cultural identity that goes beyond religion. Millions of people come together through tradition, art, performances, music and food. Coincidentally, Durga Puja in its present form traces its origin to interactions with the British in the late 18th century. We are delighted to present this exhibition at Totally Thames 2018 and hope it will showcase West Bengal as a destination for experiential tourism. We also seek to establish collaborations between artists from across the world with the artists of West Bengal.”

Debanjan Chakrabarti, Director East and Northeast India, British Council, said: “This exhibition is a legacy programme arising out of the Silk River project by Kinetika, which was one of the flagship programmes of UK-India Year of Culture in 2017. British Council India has been inspired every day of the last 70 years by the art and culture of West Bengal. I hope this exhibition, which showcases the creativity and culture of Bengal’s river communities, will inspire young people from both India and the UK to build enduring connections through education, arts and culture for the next 70 years.”