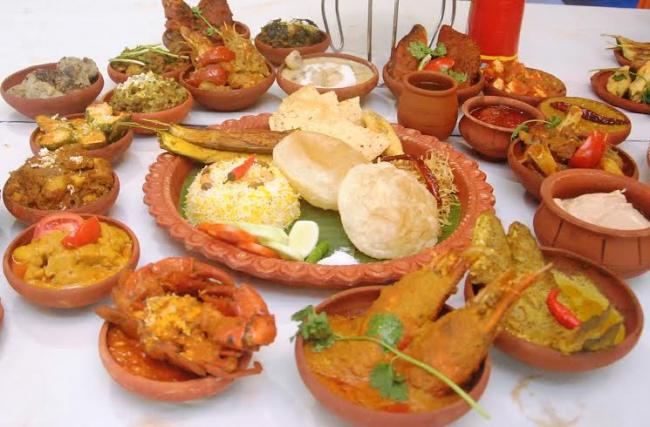 Thakurbari cuisine to be on platter on Puja days

"From nostalgic Goalondo chicken curry, which were reportedly served to the Poet during the steamer ride in erstwhile East Bengal, to exotic Dak Bungalo Mutton, we have brought from closet little known delicacies which were much in vogue in those days," Executive Chef Israfil Khan told IBNS recently. "There will also be Pabda Sorshe Jhal', a favourite savoured by the aristocratic Bengali families in those days including the Tagore household as known from our own research and we have sought to retain the authenticity," he said. "As dessert, there will be 'paka amer sandesh', a favourite of the bard as found out from numerous accounts of his food habits by disciples, family members and his own writings like 'Amsatto Dudhe Pheli....Sandesh Makhiya Tate' (Sandesh mixed with mango pulp as lunch dessert) as well as phulkopi sandesh (sandesh with cauliflower) which was a typical invention in those times and not in much vogue later on," Khan said.

General Manager Arindam Bose said,  "We will be introducing Ilisher Tel Jhal aar Posto Diye Tel Jhal, two other 19th century-20th century dishes, besides the usual Bengali speciality menus like Paturi, Dab Chingri, Bhapa Ilish, but there will be no fusion or contemporisation attempt which will snuff out the taste and smell of the original,"

"The spread will be both for those visiting the Floatel Bridge restaurant on the puja days for the special lunch and dinner buffet from October 18-25 (the last day of immersion) as well as those availing the river cruise and trip to Belur Math, Bose said.

With the view of new-look swanky Vidyasagar Setu on one side and the iconic Howrah Bridge on the other, the Puja days can be relished in the speciality resturant with the dishes available both as part of a buffet as well as part of the a-la-carte menu 24/7 for a relaxed lunch on the river front away from the crowd, jostle of puja pandals.
Related Images