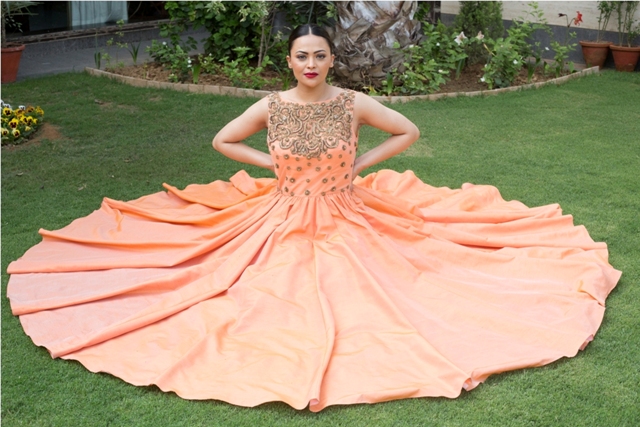 Trans World Features | | 30 Apr 2016, 06:51 pm
#Fashion, # Ridhi Arora, # Sequins in fashion
Itâ€™s not time yet to say goodbye to the sequins. In fact, glitter is getting all the attention in the current apparel scene, finds Pramita Bose

Bling in fashion and lifestyle refuses to wane, even in this hot and humid season, it seems. From flashy cars to jazzy outfits to sparkling jewellery, glitter spells glamour for the trendy. Yes, you got it right. Sequin in fashion is back with a bang this season.

Spangles, paillettes, shimmers are ruling the runway. They prove popular for detailing of the ensembles. Subtle sequins, gilded ornaments, rhinestones, diamonds -  all conjure up a beautiful canvas combined with  intricate embroidery, wacky motifs and attractive designs. A hint of glint on jackets, gowns, dresses and suits glow all the way from women’s wardrobes to men’s jackets.

“Sequin has evolved from being an on-ramp appetiser to becoming the favourite OOTD (outfit of the day) for the party circuit.

“It lends a bold and eccentric edge for those who love sporting quirky sequin outfits,”  points out designer RozinaVishram.

She is supported by designer Swapnil Shinde: “Sequins are conspicuously in vogue now. Be it basic shirts, gowns or skirts, it definitely enhances your dress by adding a dash of glamour and elegance to it,” adding ,“You can further incorporate your own ingenious ideas and creativity to play up the sequins. Internationally too, it’s catching the eye because of the kind of drama it evokes.”

Normally associated with star-studded glam circles and social dos, sequin fashion is traditionally seen as gaudy. But new-age designers give it a cool twist to make it as smart and sassy as possible. Remember the king of pop Michael Jackson’s moonwalk with a glove in one hand? The mitten attracted special attention because of its high-fashion statement. Adorned with Swarovski and Loch Rozen crystals and sequins, the bejewelled glove became a trademark accessory for the talented performer with a huge following worldwide. Even a diamante gauntlet emerged as a style symbol after the rock star donned it. 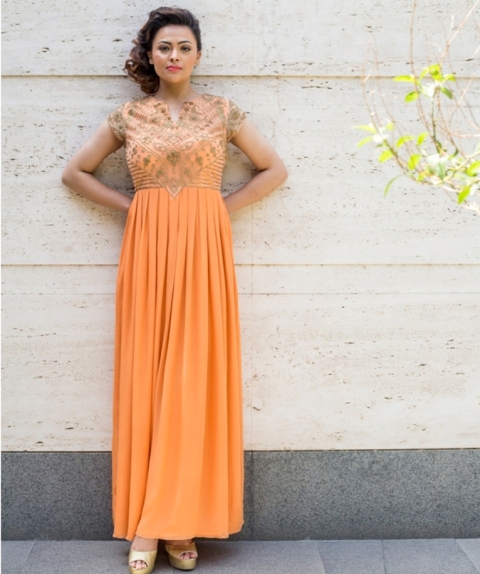 Incidentally, Indian garments are compatible to any given style as fashion analysts observe. In case of shimmery fashion, the picture remains the same. For they give no less competition to their western counterparts. “Gowns,lehengas, saris, suits et al can flaunt some sort of shimmer embellishments on them. This adds more charm to the occasion and makes it authentically glitzy,” says draper Ridhi Arora. On the western front, “formal gowns, club dresses and nowadays, even denims and T-shirts display shimmer works to spell an element of strange oddness.”

Vishram lays emphasis on long lengths and variable dense textures that usually Indian outfits tend to possess. “Stretched, elongated lining lehengas are best examples of sequin-studded extravaganza. Also a plain khadi sariin muted shade can be wrapped around using a blouse heavily worked with sequins. It goes without saying that sequins give a touch of glimmer to an otherwise faded palette of conventional clothing.”

For western wear, she picks up the little sequin dress to replace the oft-repeated LBD (little black dress) put on by most celebs at pubs or on party circuit. “The sequined maxi dress lets you gain enough volume and the required aura around you. It looks simply great.” The designer observes that sequins are preferred pals of many actresses who often slip into a similar ‘sequined wonder’ to appear in different red carpet galas. “It’s a deep-rooted fixation that is not easy to evade,” she believes.

Shinde cites the classiness of Indian outfits when crafted with sequin work. “Take any Indian apparel, be itlehengas, Indo-western gowns or wedding costumes to name a few — sequin embroidered garbs are a perfect fit for any Indian event. You may also select various colours according to body types, skin tones and suitably show up as a ravishing diva,” he says. Chipping in further, he informs that “sequined crop tops, shirts, dresses, jackets, pants and gowns are making a huge noise on the runways at western fashion weeks. “If you discernibly add that extra sheen to your wardrobe, you are bound to make heads turn.”

Shimmers not only come in sequins but also in detailed ‘stonework’. Many precious stones are used to adorn fabrics. “Semi-precious stones are imported depending on the dress type and its hue in order to decorate its entire expanse. Stones do stand out in heightening the worth of attire to its wearer and lends a dramatic value to it. To me, it is always a right choice,” Shinde asserts.

Arora sets her sight on rubies, pearls and very importantly, Swarovskis to raise the standard of the fabric. “The price of the material can be jacked up resting on the rich quality and cost of the ornate stones being sewn or attached to the fabric surface. The look and the overall feel also varies when one walks down the fashion-lane clad in exquisite gowns, saris or lehengas stitched with luminous pearls or stunning quartz crystals,” she explains.

Vishram stresses upon the bright rhinestones and radiant crystals to glisten the yards of thick slinky saris. “Even glitters are superb examples to fine-tune with a shimmery outfit and aptly elicit that coveted attention,” she finds.

Georgettes, crapes, polyester, satins are some of the materials mostly used for formal wear in sequin fashion. While neutral tones ideally blend with shimmery fashion to the tee. “Whites, blacks, greys and blues are a few good instances. Other than this, neons and silver too are clubbed with this style. Also, the golden hue in traditional wear looks awesome,” says Arora.

Obviously, it’s sizzle time with sequins for the fashion conscious.