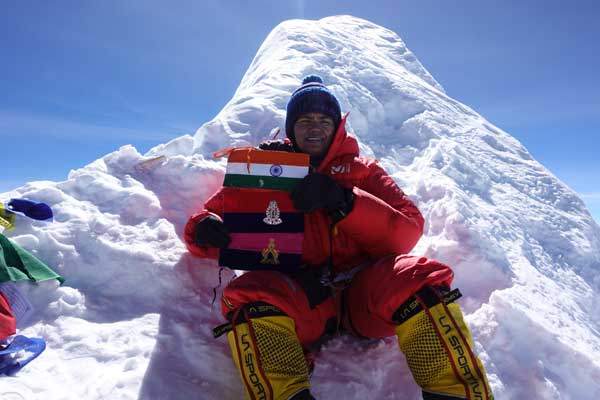 She climbs to conquer

At 10.00 am on Sept 25, 2017, Aparna Kumar reached the summit of Mt. Manaslu, the eighth highest peak in the world and unfurled the tricolor to become the first Indian woman to scale this inhospitable mountain in Nepal.

In 2016, Aparna became the first woman IPS officer to scale the highest peak of the world—Mt. Everest. She is the first IPS/All India Service Officer to climb Stok Kangri (20,182 ft) in Ladakh.She is the first All India Service Officer(male or female) to scale the highest peaks of six continents out of the seven summits.Likewise, she has many more firsts in her kitty. 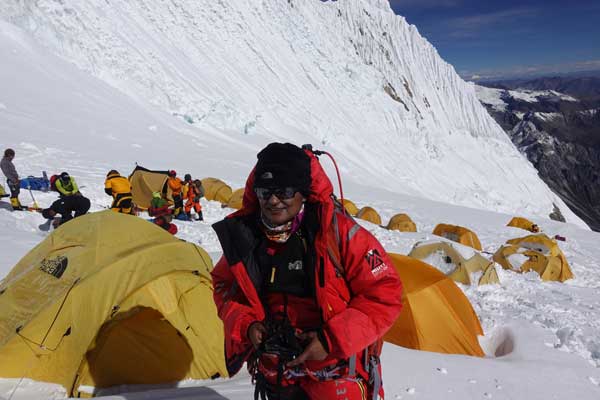 In addition to these, there are over 50 Himalayan peaks that reach an elevation of over 7,000 metres (23,000 ft) making Himalayan range the highest mountain chain of the world.

Located some 65 km to the east of Annapurna, Manaslu towers over the Gurkha Massif in Nepal.Manaslu gets its name from the Sanskrit root Manasa which means ‘Mountain of the Spirit.’  It is known to the locals by its Tibetan name ‘Kutang.’  The long ridges and glacial valleys surrounding Mt Manaslu offer approaches from all directions. But, the summit calls for a very steep climb in the final leg. 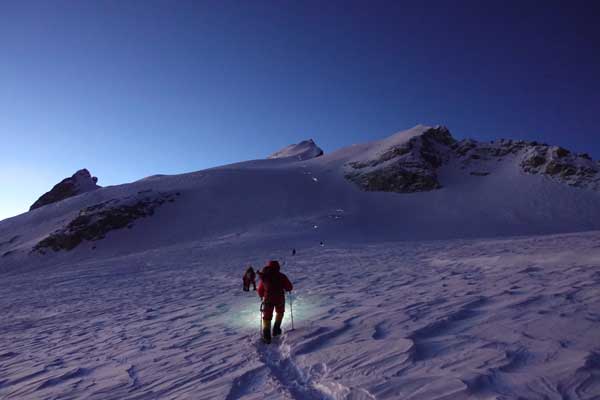 Aparna Kumar is a 2002 batch IPS officer posted as DIG with Uttar Pradesh Police with additional charge of Provincial Armed Constabulary (PAC) in Lucknow at the time of scaling Mt. Manaslu.  She has since taken over as DIG Indo-Tibetan Border Police at New Delhi.

A native of Bengaluru, Aparna is in her late thirties and a mother of two—a daughter (Spandana) and a son (Neelkantha). Her husband, Sanjay Kumar, was the District Magistrate & Collector of Allahabad in Uttar Pradesh till recently.   He has since moved to Lucknow as Special Secretary, Revenue Department, Government of Uttar Pradesh.

For someone who started the Basic Mountaineering Course in 2013 and underwent the Advanced Mountaineering Course in 2014 rather late in her life, Aparna has made long strides in rapid succession.  After trekking and climbing in Uttarakhand, Jammu & Kashmir and Himachal Pradesh, she set her eyes on the Seven Summits. Sevens Summits represent the highest peaks in the seven continents of the world. Out of the Seven Summits, Aparna has scaled six in record time of 21 months. 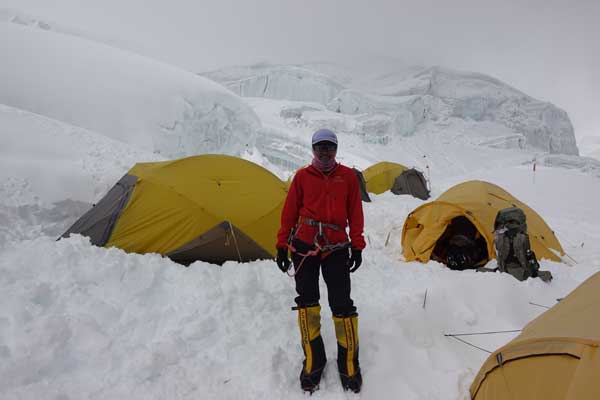 The conquest of Mt Everest took three attempts as Aparna’s first attempt was called off due to avalanches in 2014 and the second attempt in 2015 had to be aborted because of a massive earthquake which wreaked havoc in Nepal.

With a beaming smile on her face and a great sense of achievement, Aparna Kumar, declared that ‘conquest of Mt Manaslu was one of the greatest uplifting experiences of her life,’ as she landed at the New Delhi Airport after conquering the eighth highest peak in the world.

‘It was a tough climb…what with the inclement weather and minor accidents…but, in the end, everything went off well and we summited on September 25, 2017,” continued Aparna.

“I think it is a proud moment for India; for Indian women and women all over the world; for IPS cadres as well as Uttar Pradesh Police; and, Uttar Pradesh as a state.  I am glad that I managed to scale this hostile peak in my very first attempt and unfurl the Indian tricolor on the top of Mt Manaslu. I am indebted to my family, friends and numerous well-wishers for their good wishes and prayers that have helped me to survive and succeed in my endless passion for mountaineering. In this regard, I wish to thank my mother in a special way for looking after my kinds when I venture out on long mountaineering expeditions.” 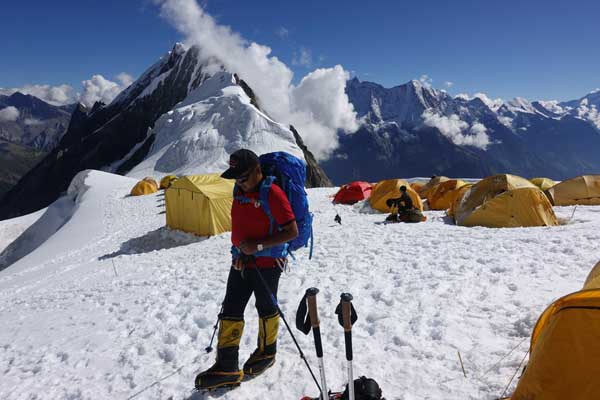 Believe it or not, Aparna has scaled six of the seven summits, which represent the highest peaks in the seven continents of the world, in a record time of 21 months.

Aparna had to abandon the Denali expedition earlier this year due to hostile weather conditions.  If she had climbed Mt Denali, she would have completed the seven summits in June 2017. As she waited for a suitable window for her next attempt to conquer Denali, Aparna got this sudden impulse to climb Mt Manaslu.

After two reconnaissance missions by H W Tilman in 1950 through the northeast face and a Japanese team in 1952 through the eastern face; and, failed attempts by two Japanese teams in 1953 and 1954;  Mt Manaslu was finally conquered by Toshio Imanishi, Gyalzen Norbu Sherpa, Kiichiro Kato and Minoru Higeta of a 12-member Japanese team in May 1956 via the north face.

After a long lull of 15 years, another Japanese team summited in May 1971 through the northwestern spur.  Since then expeditions of Koreans, Austrians, Spaniards and people from other parts of the world have tried their luck in scaling this peak.

For her Manaslu expedition, Aparna landed at Samagaon (3,380 mtrs) in Nepal by helicopter on September 9, 2017.  Then came an acclimatization hike from Samagaon to the Base Camp (4,910 metrs) which served as a self-imposed endurance test for her.  The Base Camp attracts heavy snowfall due to cloud condensation. After a night’s rest, she hiked from the Base Camp to the Cramping Point (5,200 mtrs) and returned after she hit bad weather.

The trek from the Base Camp to Camp 1 passes through Manaslu Glacier which is heavily crevassed.  Unlike ‘crevices’ which refers to small cracks or chinks in rocks, ‘crevasses’ are deep fissures in glaciers which are crossed over by tying together ladders and placing them horizontally from one end of the crevasse to the other. 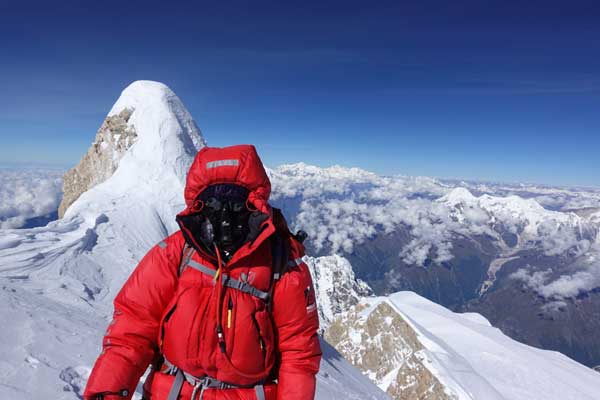 The climb from Camp 1 to Camp 2 is a very steep one involving vertical climbs prone to active icefall.  Camp 2 forms the technical section of the climb located at the top of the Serac section on a flat area.  At 6,400 mtrs, it is sheltered by a series of ice cliffs.  After that Aparna descended to the Base Camp and waited anxiously for a suitable window to reach the summit.

On September 24, the team launched itself for the final summit.  Climbing from Camp 1 to Camp 2; and, from Camp 2 to Camp 3; the team reached Camp 4 on Sept 24, 2017.  The trek from Camp 3 to Camp 4 was the longest and the most challenging one with steep climbs and blue ice.

On the night of September 24, Aparna was delighted to learn that the summit was on.  She launched herself for the climb to the summit with her Sherpa Ang at 4.00 am and reached the summit at 10.00 am on September 25, 2017.  She unfurled the Indian flag and the flags of Uttar Pradesh Police and Provincial Armed Constabulary at the summit and became the first Indian woman to scale Mt. Manaslu.

In Nepal, mountains are revered as deities and, in deference to local sentiments, the climbers stop short of a few feet of the actual summit.  For Aparna it was quite an adventure and a thrilling experience which brought infinite satisfaction and happiness.

(Vincent Van Ross is a journalist, columnist, writer and editor based at New Delhi in India.  He also dabbles in poetry, fiction and humour.)