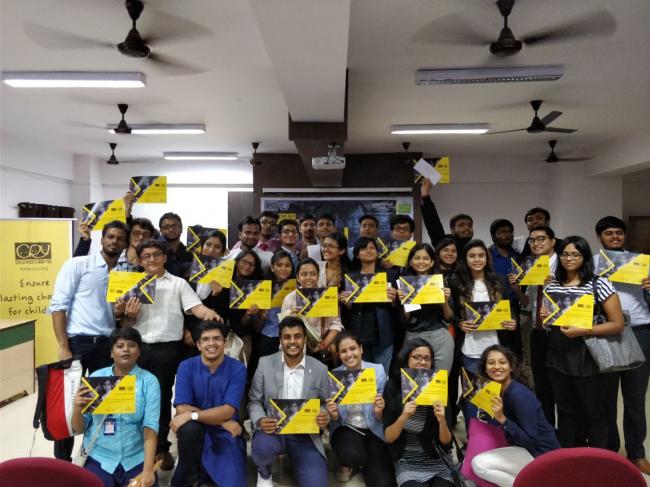 Volunteers of CRY – Child Rights and You, the leading child rights organization, hosted a two day-long debating session called Model United Nations (MUN) at Techno India Campus at Rajarhat, where as many as 80 students’ groups participated in the debate.

Participants were divided into teams representing various countries wherein they researched on respective country policies and debated over the weekend.

The two threads of discussions were namely on “Pawns on the Chess of Humanity: Trafficking and Abuse of Children” and “Disability is Not Inability: Linking Special Schools to Mainstream Schools in Order to Promote Inclusive Education for Differently Able Children”. The best delegate awards went to Ujaan Natik who represented France, and to Rebanto Roy and Prajukti Sen who represented Japan.

“MUN was designed to build the critical discourse on the issues affecting the children and how each of us can play a role to build their childhood to a happy, healthy and creative one.  The debating sessions were essentially conceived to raise awareness about how policies that affect the global community are decided upon. This was just another way to enable young minds to raise their voices towards the issues related to child rights globally and let them think through the solutions,” said Mohua Chatterjee, General Manager Development Support and Programme Head at CRY East, in her inaugural speech.

“Going by the founding philosophy of CRY, “What I can do, I must do”, MUN was an invitation for the youth to engage themselves with issues affecting the underprivileged children around them – to build their understanding, to do analytical research and to offer help and support to solve such issues. The participating students went back enriched with newer dimensions of the contemporary world around them,” said Subhrajit Sinha, General Manager Planning at CRY.

Model United Nations (MUN) is a popular platform which serves the purpose of emulating the proceedings of the UN General Assembly, and brings in an opportunity to the upcoming young leaders to become acquainted with the global issues and thought processes. This is also a platform for those who aspire to impersonate the diplomats and delegates of their respective countries to discuss international policies and have an impact on the global community.