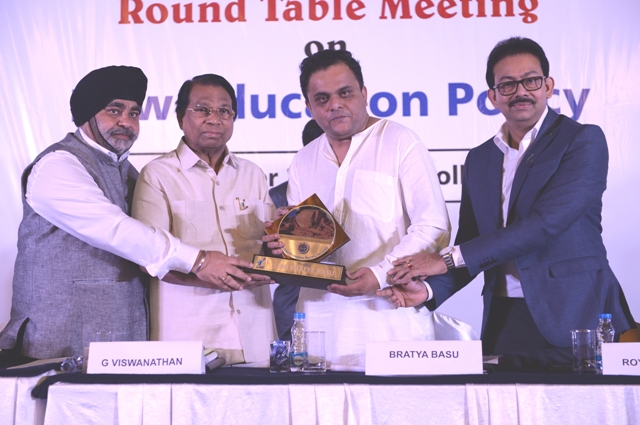 This was the second meeting, the first Round Table Meeting was held in Coimbatore.

Chief Guest, Bratya Basu, the state's Minister of Information Technology and Electronics, talked about some key issues which can improve the entire education system.

“Education plays a vital role in the development of our country. The West Bengal government is following a very balanced policy to achieve our goal. We can’t stop Sarba Siksha Abhijan  or the Mid Day Meal programme. We should welcome any kind of innovation because this can bring in a lot of scope to better the education system,” said Bratya Basu.

Dr. G. Viswanathan, President, EPSI and Founder & Chancellor, VIT University, said, “It is high time to take a decision on the education system. We have to update the examination system, improve the infra structure, modernize the curriculum and so on.”

In his inaugural address, Dr. G. Viswanathan said that the private sector is a major player now both in School and Higher Education and providing critical support to the Indian society and the economy for the preparation and grooming of the young generation, who will be taking big responsibilities in future.

He said that the Indian economy was liberalized in 1990s, which ultimately resulted into higher and sustained economic growth.

It is unfortunate, he said that the same liberal policy has not been replicated in the Indian education sector, even after twenty five years, which is struggling due to too much rigid control of regulatory bodies and resulting bureaucratic hassles and corruption.  It has also increased the cost of education, because institutions are forced to pay hefty bribes for their approvals and permissions.

He said that in coming decades, it can take an upturn and compete with developed nations if right kind of regulatory policies are adopted and funding support to the tune of 2% of GNP is provided by the Union Government.

If the current situation, i.e., continuous retreat of the state from its obligation to provide higher education for all, allowed to prevail under the New Education Policy, it can provide a disaster to the future of Indian economy as well as for the social stability, he warned.

He said during last decade, the state's school education and technical education have stagnated because of neglect by the policy makers and state education department(s).  Several hundred engineering colleges have been either shut or become unviable due to short-sighted policy of the Government.  There is a need for developing a pragmatic, vibrant and progressive education policy to take into consideration the present and future potential of the Indian economy.