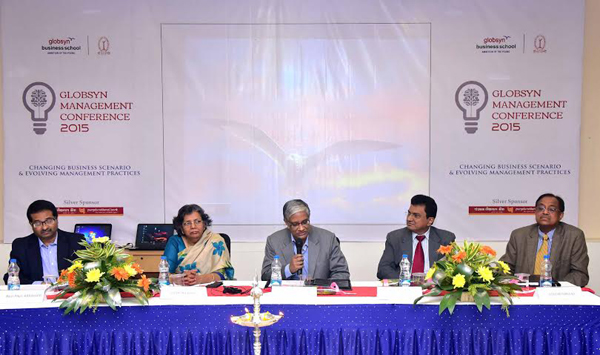 India Blooms News Service | | 19 Dec 2015, 04:21 pm
#Globsyn Business School hosts GMC 2015
Kolkata, Dec 19 (IBNS) Globsyn Business School, a B-School in Kolkata, hosted the Globsyn Management Conference 2015, here on Friday.
The conference was attended by industry experts, who sat down for a panel discussion, lending out their valuable advice and plans on how to tackle the business sector. 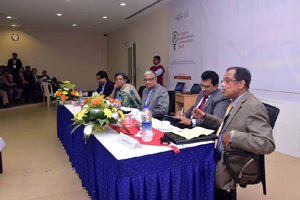 Principal advisor of Ashoka University, Malabika Sarkar, the chief guest of GMC said: "Galileo's theory of the Earth orbiting the Sun took 120 years to be accepted. Many many years later Darwin took 10 years to write his second book, so see how the response time shrunk from 120 years to just 10 years. Today, for one to respond to a change it takes a matter of minutes."

R N Kar, the regional director of RBI spoke about the history of banking in India.

He said, "People say banking is boring, but it can be the most exciting job one can perform."

Speaking at the event,  Academic Dean of IIM Calcutta, Biju Paul Abraham said, "Firms will need to change because the world is changing. One needs to reinvent in order to stay relevant. If you fail to reinvent yourself within five year's time, you are going to go out of business."

He also said that a lot of future success depends on the ability to analyse big data.

He said, "Global warming is one such thing. The country have pledged support in the recent climate talks but whether the country will be able to implement the plan, we don't know."

Soumendra De, professor of Finance at Menlo College said, "Companies will be moving more towards equity financing. Debt financing will not so much be employed."

De said that the debt financing era, responsible for the salary hike is finally coming to a close and one can expect the fall in salaries in the near future. 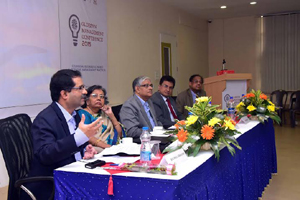 He also said that due to the salary drop, the corporate will need to educate their workers, so that they acquire the skills.

Imon Ghosh, former Director of the Academy of Human Resource Development, Ahmedabad, spoke about how demography has been overlooked for years by economists.

Terming it a major player, Ghosh said, "You need to look at the working age. Higher age means lesser tax payers. That's what happened to Greece."

Ghosh also said that India is the only major country in the world that will not suffer anything similar in about 50 years time.

He also said that due to higher age, China have skill shortages but India is unlikely to face a similar situation.

He also called for a change of teaching method, terming India method of learning as pedagogic, he said that the time is ripe for the nation to embrace the andragogic method.

Guha said, "Reinvention is necessary, Tata Steel survived it all because of that."

Guha said that in modern times it is very necessary to have a flexible mind, quick enough to come out with an alternative solution.

Rounding up the discussion Ajitava Ray Chaudhuri said, "A lot of factors should be kept in mind. One such is income inequality, the reason why China developed so fast."

"India cannot shut itself up and say we don't care. It happened in the 60's and 70's, but in the 21st century you need to catch up with the rest of the world," Ray Chaudhuri  said.