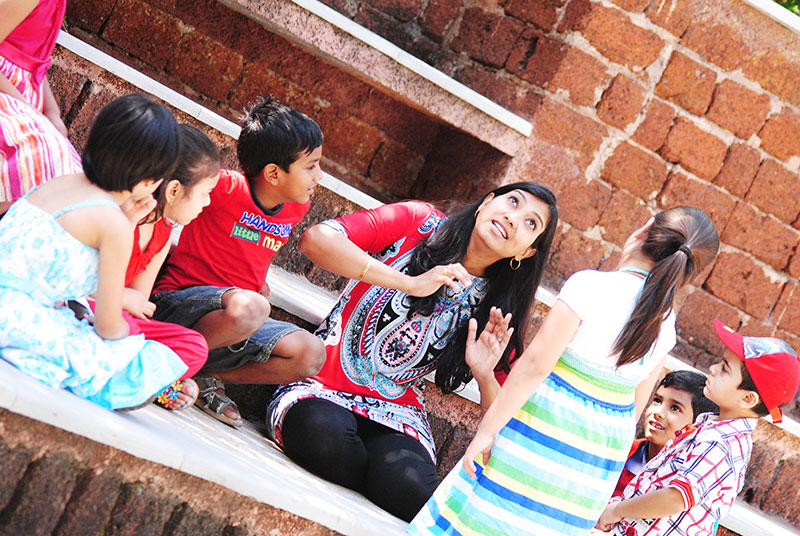 That’s the way a story is told

Telling folk tales or stories from the epics to children is a part of our oral history, as across the world.  But it is also an art –and challenge too, how to retain their interest, particularly with a multitude of channels open to them today. Deepa Kiran of Hyderabad is a modern storyteller who brings old stories alive with élan - dancing, acting, playing  the flute or tambourine. Mesmerised by her act at a recent event, Ranjita Biswas chats with the artist to discover what makes her tick

Deepa Kiran is an English literature post-graduate with a Gold Medal from the University of Hyderabad, a ‘Best E-Content’ National Award winner, a ‘Best Actor’ awardee, Wolf Film Festival, Italy, to name a few of her achievements. And she tells stories with great aplomb too.

Excerpts from an interview :

With your educational background in the English Language Teacher Development programme, how did you get involved in the art of story-telling?

In 2008, when I was living in a town in Maharashtra, I had a kidney malfunction, the treatment of which required me to be on about 80 tablets of steroids for over four months. Fed up, I decided to do something I love and held a three-week summer camp for children teaching stories, crafts and dance. In the follow-up check-up after the camp, the doctor stopped my medication and announced that I was cured! I never gave up storytelling after that. 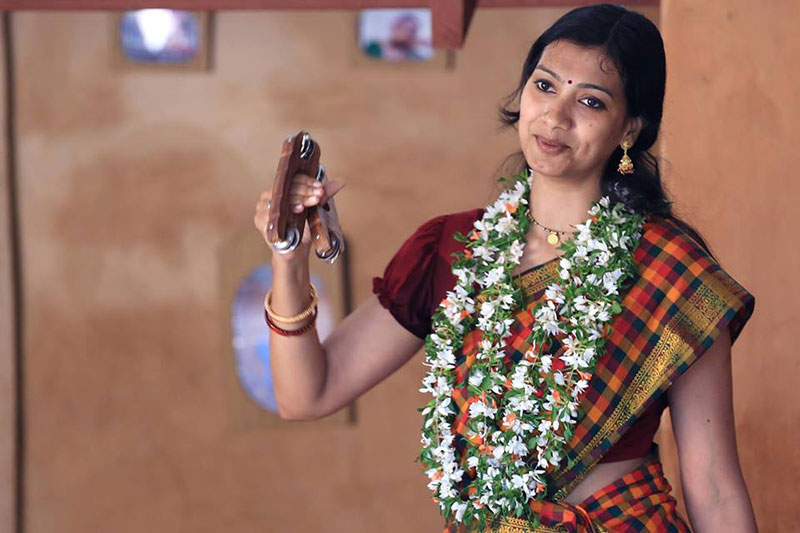 I have conducted workshops for over 75,000 teachers in India and abroad, and with over a lakh children. My work has taken me to almost all states of India and to international festivals in Scotland, South Africa, Iran, Thailand, etc.

Were you trained in any performing art?

Yes, from my early childhood days I trained in and performed Bharatanatyam to which I owe my ability to express and articulate nuanced emotions, and also credit it with devising my music-movement- woven storytelling style. I also trained and performed dance in Rabindra Sangeet tradition from Bengal and Kuchipudi from Andhra Pradesh.

How do you integrate your training as a teacher in your story-telling style?

A teacher is a constant listener; she is constantly observing her learners. She does her preparation first: reads up and then simplifies the subject for the level of her learners, ensures to make the subject interesting for them. During class she gauges the engagement, and is aware through the look in their eyes, the smile or the frown, the verbal-responses and other cues, whether they have understood or not and she constantly course-corrects as she conducts the class, keeping the discipline in the class and yet carrying on with her objective. Clarity of her own speech, involvement of the students, encouraging and acknowledging them are all the teacher’s responsibility. All of these skills (among other things) are invaluable for a storyteller performing on the dais before an audience. 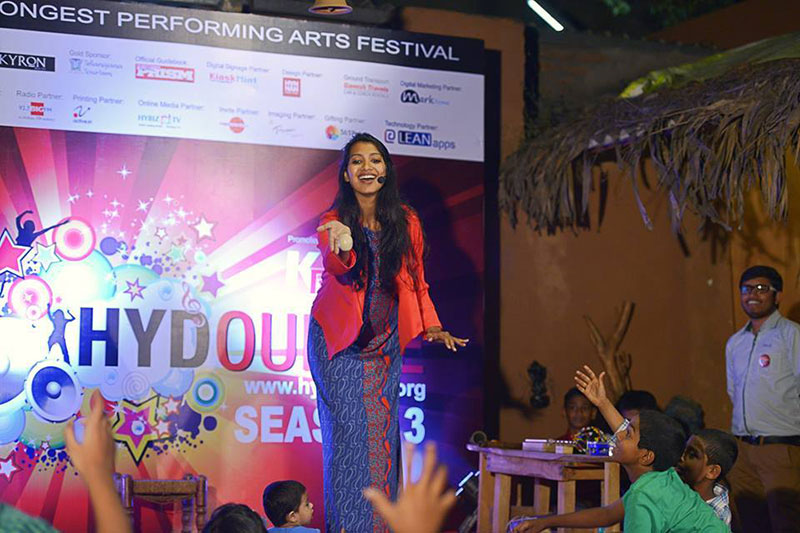 Tell us a bit about your Foundation

Story Arts Foundation was established in 2017 with the intention of working with children and teachers to promote, train and spread ‘Story-arts-based learning’ particularly in multi-cultural, multi-lingual, and challenging environments for teaching of English and emotional development as well. The foundation engages with oral traditional storytellers of India in order to revive and promote cultural-awareness especially among the young people.

Why is story-telling important for young learners?

Storytelling is much-loved by children. Offering children what interests them contributes to their development of various skills and elements of language. Language is the foundation for understanding and communication with the world. It also builds emotional skills such as empathy and resilience because in a story, the child vicariously goes through an experience. Neuro-science research also supports that it reduces stress and elevates a feeling of happiness. When we tell stories to young learners they feel happy, relaxed, motivated, and most importantly feel wanted; they feel accepted and experience a bond and trust with their teacher and classmates. So this naturally leads to a better sense of self-worth and wellbeing among the learners.

In a way, are you trying to revive the Indian tradition of story-telling that today’s highly curriculum-based education system often misses out?

True! Not only the curriculum but the other spaces like home, and social-public spaces such as temples/mosques/churches or family gatherings, festivals which were occasions for story-exchange have also dwindled if not died. In all of these spaces, storytelling needs to find its way back. It is finding its way back in various other forms today, the most popular being audio-visual mediums.

However, oral storytelling has a charm and significance of its own. In the education system, I believe that it must not be brought in as ‘stories/storytelling to substitute something in the syllabus’  but as ‘story-time that is also included in the curriculum over and above the syllabus’.  It may or may not address the topics in the syllabus but will contribute in many significant ways as mentioned above. 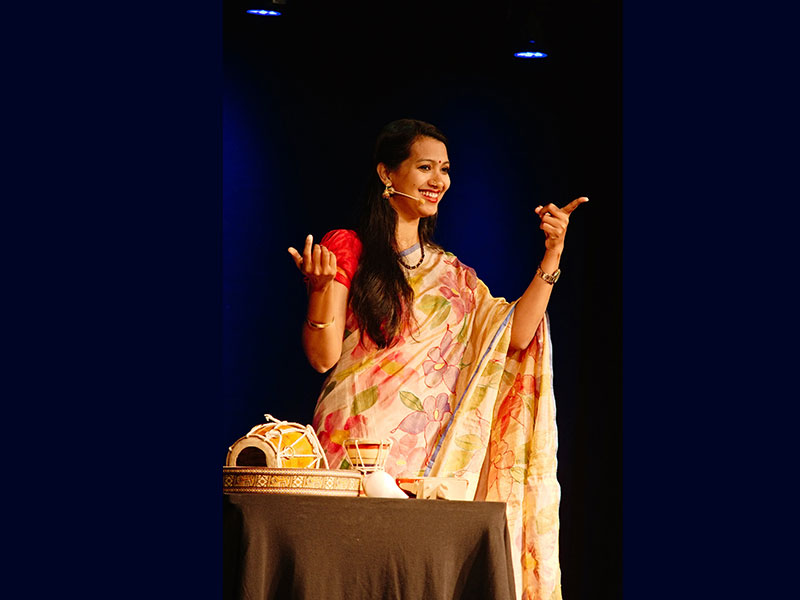 Please share your experiences of story-telling in countries abroad

Storytelling in other countries has truly been rich and meaningful every time. The first was to Iran in 2016. I haven’t seen any other country where the government, the social structure, the history, the cultural ethos are all so strongly oriented towards oral storytelling. The festival which I attended was in its 19th year and was celebrating oral storytelling traditions of Iran and around the world and was organised by their external affairs department. There were storytellers from ten countries. Experiencing first-hand the Iranians’ rich storytelling traditions, kept alive by their young and old, was inspiring indeed.

The Scottish Storytelling Festival is one of the oldest in the world, and to perform there in the main Scottish Storytelling centre and travel and perform at venues across the country was an amazing experience. The challenge of crossing the language-barrier and connecting with the audience in South Africa, Indonesia, Thailand and Austria was very exciting and satisfying too .

Any special memories  that stay with you?

Sure, some memories stand out:

-Holding  the Indian flag after my performance in Tehran.

- Me and the street-children of a road-side library in Yogyakarta, Indonesia, laughing and crying together when it was time for me to leave

- Children in Austria running up to me and excitedly speaking in German, after a storytelling that I did in German-language.