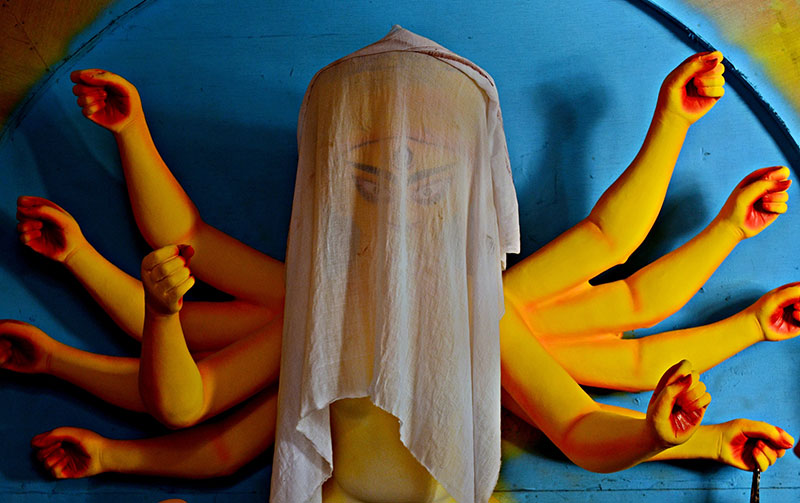 Kumartuli Walk: Where the Mother Goddess is a 'Deltasur' slayer

In the warrens of Kolkata's clay artists' colony Kumartuli, the idols of goddess Durga with ten splayed arms and three observant eyes, are getting final touches in the second year of a global pandemic. IBNS writer Debayani Bose marvels at the defiance of the potters to disease and universal budget crunch as they mold the lumps of clay into paragons of divinity

Dugga Dugga! Every elder member of a Bengali family would utter invoking the goddess Durga when someone leaves the home for some good work or on some long journey. It was no exception when this writer left for Kumartuli, the potters’ lane in Kolkata, on a relatively better-sky autumn day amid the spell of extended monsoon that had been pounding the city for days and submerging the streets.

The words of a homemaker mother actually reached the ears of the goddess. The Kumartuli walk was rain-free. 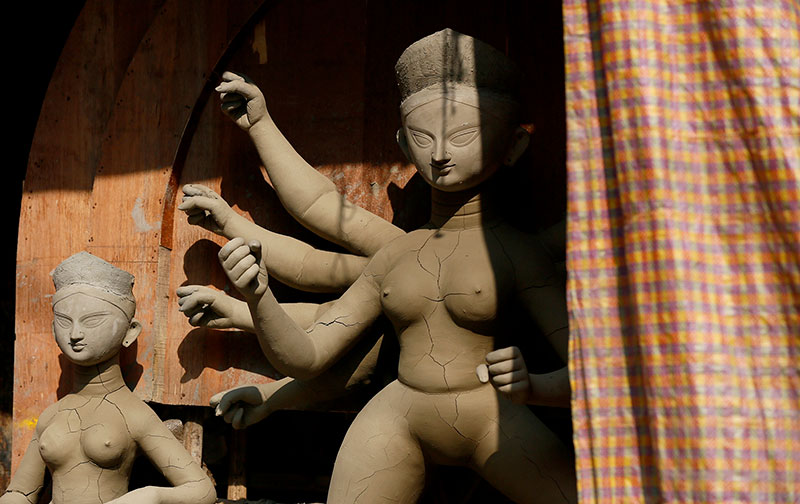 As the city gears up for the frenzied annual 5-day-long (now almost a week-long) Durga Puja celebrations, many people whose toil, tenacity,  and craftsmanship turn the eastern metropolis into a land of carnival and magic, are actually  running the gauntlet thrown by the nature and what is now known as a man-made pandemic.

The tradition of uttering the Durga name comes from a sense of invoking the protective blessing of the goddess where Maa Durga and her children are considered family. Well, people need it more than ever since the deadly coronavirus struck early last year.  So the asura (the demon Ma Durga slays) is themed as "Deltasur" (the more deadly Delta variant of coronavirus) this year in Kumartuli.

Durga Puja as every Bengali understands is about the slaying of the buffalo demon Mahishasura by the goddess formed from the divine energies of Brahma, Vishnu and Shiva (Maheshwara), the creators of the Universe. 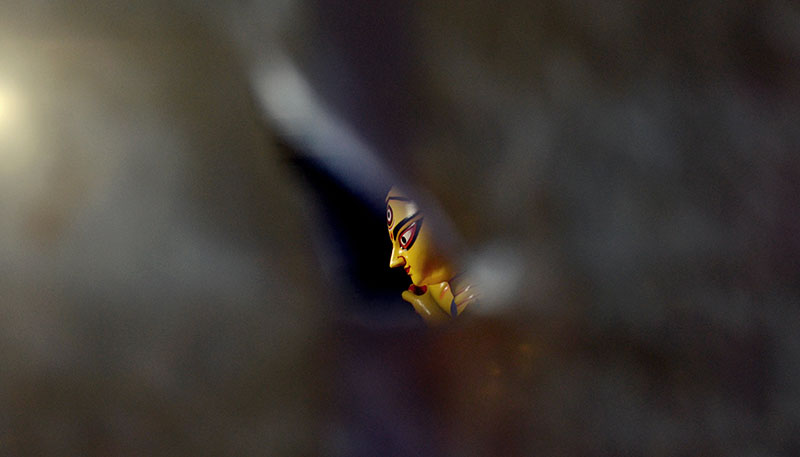 Kumartuli, the potters’ colony nestled in the northern fringes of the city by the river Hooghly, is now on a clock. Only, for the second year in a row, they face off the economic impact of corona.

The Kumartuli artisans not only manufacture clay idols of Durga and her family (followed by other idols worshipped yearlong) for West Bengal, but also export them to other parts of the world.

Traditionally, the potters of Kumortuli would shape the clay from the river Ganges beside their home into pots to be sold at erstwhile Sutanuti bazaar (later known as Burrabazar). With time, they took to making the idols of gods and goddesses for both Zamindar (landlord) mansions in the city and the thousands of community pujas across West Bengal. 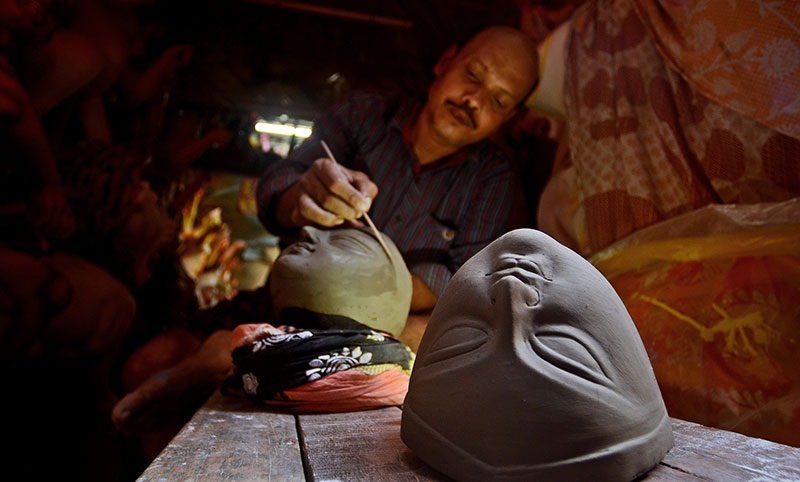 Speaking to IBNS-TWF about the puja preparations this year, ace clay artist Subhash Pal says, “Orders have definitely picked up from last year when everything was uncertain as the pandemic raged. This year the numbers of durga pujas being held in Kolkata have gone up from last year.  However, the problems caused by the pandemic continue to persist.”

Explaining the major hiccup faced by the potters, he says, “As the number of trains operational are fewer, it’s becoming difficult to ferry the raw materials essential to the trade. The real work started only 3-4 months back. Also, the puja committees have curtailed their budget and have set a cap on their spending, further making it difficult for us.”

The rains have also played a spoilsport. Work which previously took three days to complete is now taking much more time adding to their woes. 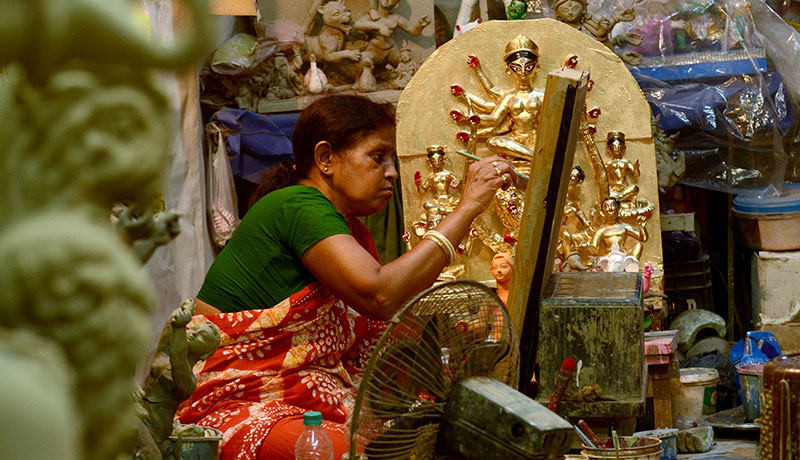 "We are now using paint colour instead of the traditional clay to hasten the drying process of drying the idols. This has also increased the cost of manufacturing the idols by 25 percent even though budgets have gone down,” he adds.

However, he feels things will definitely start looking up once the pandemic eases and the trains get operational at a normal pace. "In 2020, 40 idols were sold. This year, it has increased to 43 and hopefully next year things will improve further," he adds. 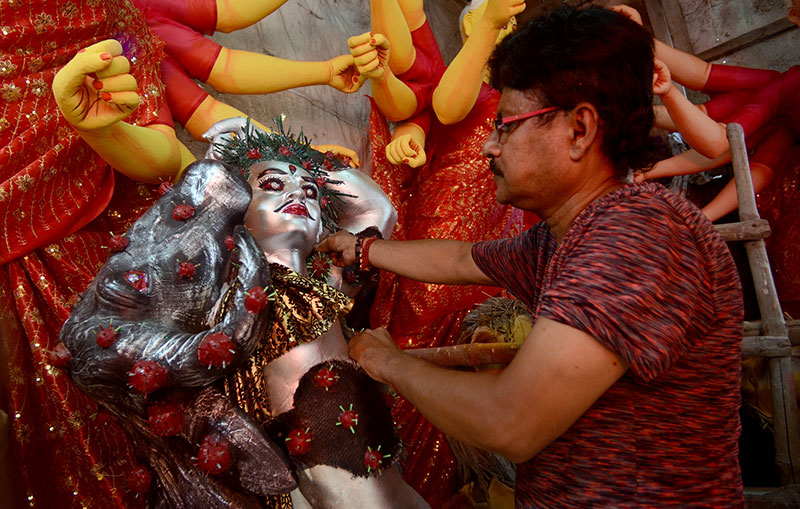 Innovation is not new to Kumartuli and in keeping with the spirit of the troubled times, clay artist Indrajit Paul has come up with his own innovative clay idol of goddess Durga where she slays the ‘deltasur’, symbolic of the Delta variant of Covid-19.

“I came up with the idea of goddess Durga slaying the ‘deltasur’ which is wreaking havoc worldwide. Like every year, this year too the goddess will definitely overpower the virus,” he adds, his face beaming with optimism and hope which remain undiminished by the pandemic.

The Delta variant caused an increase in death toll mainly among the unvaccinated people. 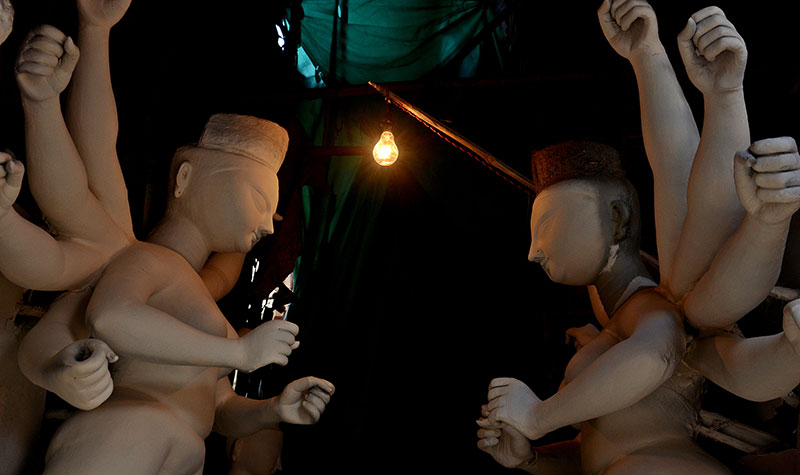 Last year, the artist had created ‘coronasur’ as his theme, named after the deadly Coronavirus.

To many the picture of the goddess Durga wearing a radiant smile as she slays the demon Mahishasur may seem a bit paradoxical and odd.

But perhaps it drives home an important message that no matter what life throws at us one must smile through adversities even if it means braving an unforgiving pandemic that led to death of millions worldwide besides robbing people of their livelihoods.

However, the show goes on in Kumartuli, the hub of unsung clay artists behind the annual autumn euphoria hailed as the grandest street festival of the world.