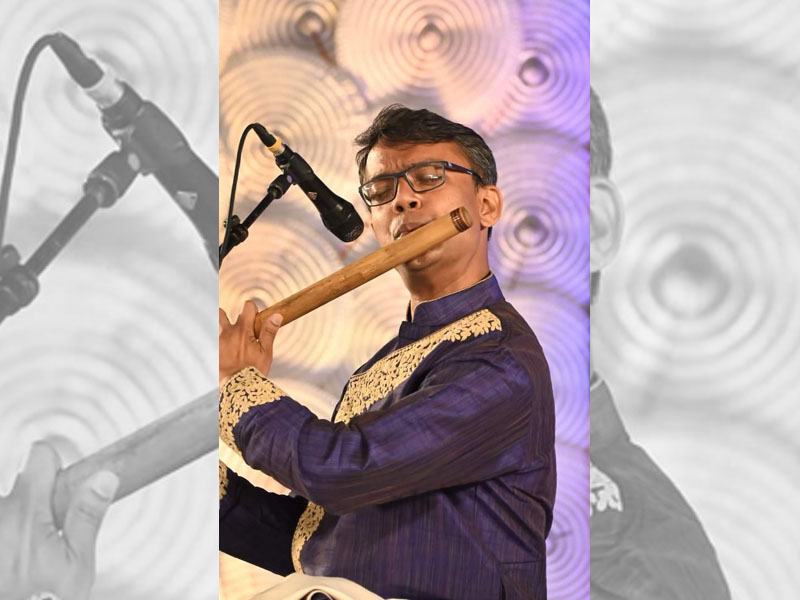 Kolkata: A cop by profession, flautist Indrajit Basu won the hearts of Indian classical music connoisseurs with his performance at the prestigious Dover Lane Music Conference 2021.

Indrajit Basu performed in this 'Ivy League' music festival for the first time and won the hearts of listeners by his rendition of ragas patdeep and basant. He was adeptly accompanied by Ujjwal Bharati on the tabla.

By profession Indrajit holds a responsible position in government service as a cop, but despite his professional constraints he does his riwaz regularly.

Born in a family of cultural aficionados in Kolkata, Indrajit developed a deep love for culture, especially Indian Classical Music and started playing the bansuri (flute) from school days. Listening to all types of music was like breathing for him since his earliest years but he found Indian Classical Music as the most attractive genre of music amongst all. The transverse flute was selected by him as a medium of musically expressing himself.

His formal tutelage in Indian Classical Music started much later after he graduated from Calcutta University. He was initiated as a disciple by Late Pandit Nikhilesh Roy of Rabindra Bharati University. Indrajit tried to imbibe the rich tradition of gayaki and soulfulness from his Guru Pt Nikhilesh Roy who was a disciple of Pt Gour Goswami.

Besides playing solo, Indrajit has a special liking for collaborating with different Indian classical instruments as jugalbandis.

Indrajit Basu is also keen in spreading the fragrance of Hindustani Classical Music. Besides, inspiring persons coming to his proximity to organise classical concerts for instrumental/vocal both kind of artists, he himself has also organised quite a few classical music conferences of which Digha Shastriya Sangeet Festival, Swargiya Malati Basu Memorial Music Conference-2019 in the name of his mother are notable.