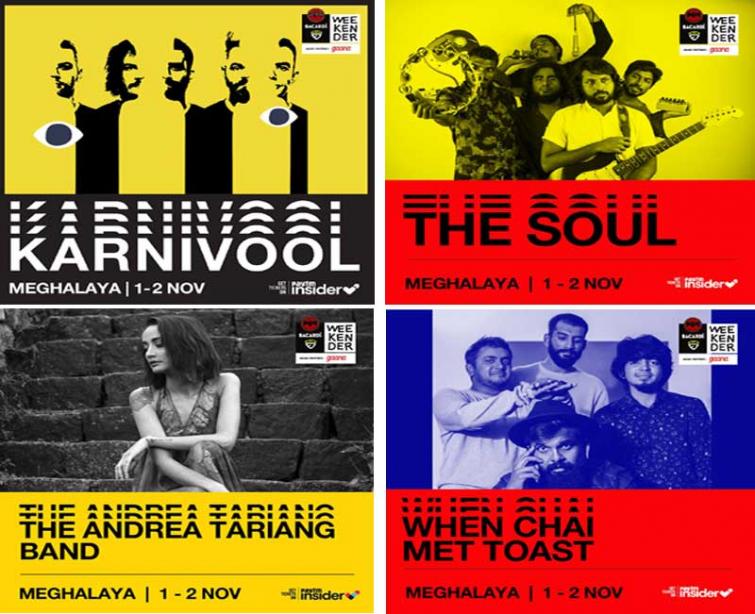 Karnivool, Intervals, Shubha Mudgal, among others to headline at Bacardi NH7 Weekender Meghalaya

Kolkata, Aug 22 (IBNS): Get ready for a musical extravaganza in the hills this November when an eclectic mix of artists go on stage as part of the Bacardi NH7 Weekender celebration to be held in Meghalaya.

The fifth edition will take place in this beautiful north-eastern state of India from November 1 to 2 this year.

Indian artists who will play at the venue are Shubha Mudgal, Benny Dayal and Funktuation, When Chai Met Toast and Raja Kumari.

There will also be musical groups from the North-east such as Soulmate: North East Blues Special, Imphal Talkies and Khazi Bloodz.

“We’re thrilled to be back in Meghalaya for our fifth year in the state," said Supreet Kaur, Festival Director. "Since our festival’s journey began in 2010, BACARDÍ NH7 Weekender has programmed extraordinary talent for an equally passionate and growing audience of music fans. With over 82 per cent of our lineup making their festival debut this year, we hope to see fans, old and new to celebrate this decade of happiness with us.”

Apart from the musical performances, there will be a bustling bazaar where you can get local finds, fashion and food.

OML is a global, artist-first company that creates intellectual properties (IPs) for content platforms, live entertainment and brands, that have become synonymous with pop culture in India and across the world.

OML’s global creator network spans over 200+ artists across genres and more than 20 countries.

After its opening act in Meghalaya in November, the festival will travel to Pune (Maharashtra) where the programme will be held from November 29- December 1, 2019.

Since its inception in 2009, BACARDÍ NH7 Weekender has featured over 600 artists from India and abroad across genres.

Tickets may be bought on www.nh7.in.

A brief description of the headliners announced so far:

#ICYMI, here's #Lineup2019 at the happiest music festival so far as it makes its way to Meghalaya once again. More acts coming soon, because we aren't done yet. Get your tickets here: https://t.co/hYPgjYbFry #DoWhatMovesYou #BacardiNH7 #10YearsOfHappy pic.twitter.com/wPghXBOHxF

Critically acclaimed and widely followed, Karnivool are a progressive metal band from Australia. With their acclaimed 2005 debut, Themata, and 2009’s ground breaking follow-up, Sound Awake, Karnivool established themselves as one of the most vital forces in progressive modern music. Now a major international draw, appearing at festivals such as The Big Day Out, Sonisphere (France), Download (UK), SXSW (US) and Hurricane (Germany), and gaining high praise from international press titans such as Rolling Stone, Billboard Magazine, Kerrang! and Rocksound, Karnivool have belied expectation again with album number three, the brazen and introspective, Asymmetry. This expansive new work was designed in the band’s Perth studio over two years, before in late 2012, the Karnivool caravan headed across the continent to bunker down with legendary producer, Nick DiDia (Rage Against The Machine, Mastodon) at Byron Bay’s Studios 301. A new album is expected this year, with the band having teased it to its audience on social media. This will the band's 3rd time in India, and their first time in Meghalaya with BACARDÍ NH7 Weekender.

Intervals is a Canadian progressive metal band. Formed in Toronto, Ontario, the band has toured throughout Canada and the United States with bands such as Animals as Leaders, Protest The Hero, Between The Buried and Me and The Contortionist. Formerly featuring Mike Semesky, Lukas Guyader, Matt De Luca and Anup Sastry (the drummer from Skyharbor, a Delhi-based prog-metal act featuring artists from the world over), the band currently features Aaron Marshall with a host of guest musicians. Having made an instrumental release titled The Way Forward in 2017, the band is currently on tour across the world promoting its new, unique sound.

Shubha Mudgal is a Hindustani classical vocalist trained by some of the finest scholar musicians and gurus of the country. Awarded the Padmashri by the Government of India in 2000, she has received several accolades and awards and has also worked on several projects related to music education. She was also awarded the Nana Shirgaokar Chair for traditional music at the Goa University from 2013 to 2015. Along with her specialisation in Hindustani classical music, Shubha Mudgal is also well known for her work with popular music. She performs with a group of accomplished musicians and composers with whom she has had a long association such as Dr. Aneesh Pradhan, Sudhir Nayak, Aditya Balani, Gaurav Balani, Anil Chawla, Srijan Mahajan and Nitin Joshi. While she has performed multiple times at the happiest music festival, this is her first ever performance with BACARDÍ NH7 Weekender in Meghalaya.

Soulmate is a blues rock band from Shillong, Meghalaya, India. Often referred to as legends of the rock and roll and the blues scene in Shillong, the band is primarily made up of Rudy Wallang and Tipriti Kharbangar, although they frequently team up with session musicians when on tour. Tipriti is considered one of the finest female singers to have emerged from North East India and Wallang remains one of the most respected blues guitarists of India.

Primarily inspired by the genres of Funk, Soul, R&B, Disco, and Pop, Funktuation is a rare combination of a live band playing dance music. The band with Benny Dayal on vocals, Carl Fernandes on bass, Alok Merwin on synth and keys, David Joseph on drums, Allwyn Jeya Paul on percussions, Joshua Satya on guitars, and Toby Joseph on sound, started out playing covers of funk music from the ’80s and ’90s, while their front-man, Benny Dayal, began to make his mark in the film music industry. Though Benny’s Bollywood career kept him supremely occupied, he, along with the band were determined to evolve into their own identity, and slowly started writing their original music. This mellifluous funk band has been making waves in the Indie music scene since its inception in the year 2011, also at the same time traveling all across the country and the world playing Benny’s Bollywood hits but with a funk-twist. They finally released their first Tamil-Funk EP ‘Funk Katcheri’ in January 2019 prior to which they dropped their first music video ‘Oora Paaru’ in November 2018. The band has a unique energy which started making waves ever since they came together. They have also collaborated with various other artists for gigs and generated some fantastic numbers to the delight of their audiences. Their biggest asset is their ability to adapt funk into regional languages such as Tamil, Hindi as well as English. They also love putting in a bit of R&B, Disco, and Soul which effortlessly blend with the genre.

When Chai Met Toast is a four-piece, neo-folk band from Cochin, Kerala formed in 2016. Their debut EP 'The Joy of Little Things' was released in 2017, followed by their second EP 'Believe' in 2018. They are constantly touring multiple cities and are a festival favorite across India. Their YouTube channel is going strong with over 3 million collective views. Apart from their releases, the band has also worked with the stand-up comedian Kenny Sebastian on the soundtrack of his Amazon Prime Show, ‘Die Trying’. They are known for their foot-tapping energy and unique brand of infectious happy music, which transcends age, genre and even language.