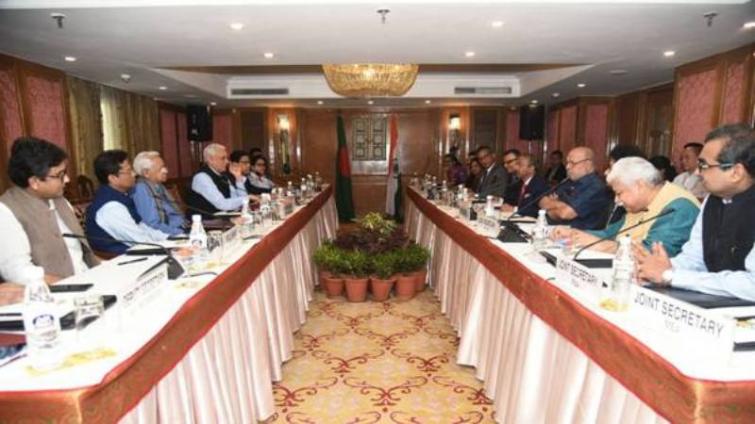 New Delhi, May 7 (IBNS): A delegation from Bangladesh led by Dr. Gowher Rizvi, Adviser to Prime Minister of Bangladesh, including Syed Muazzem Ali, High Commissioner of Bangladesh to India and other delegates met Amit Khare, Secretary and other officials of I&B Ministry on Tuesday.

The meeting focussed on various aspects of making of a feature film on the life and works of Bangabandhu Sheikh Mujibur Rahman, co-production of which had earlier been announced by the Prime Ministers of both the countries.

The movie will be directed by acclaimed filmmaker Shri Shyam Benegal who, along with scriptwriter of the movie Atul Tiwari, was also present during the meeting.

The Bangladesh delegation assured full cooperation in ensuring smooth logistics for shooting the movie in Bangladesh.

Atul Tiwari, scriptwriter, would travel to Bangladesh to do background research for the project. He will be assisted by Piplu Khan, noted film personality from Bangladesh.

Co-production of a documentary on Bangladesh Liberation War was also discussed in the meeting.

It was mutually agreed that the director of the documentary would be from Bangladesh who would be assisted by a co-director from India.

It was also announced that Prasar Bharati has decided to not only carry Bangladesh TV on DD Free Dish platform but also to waive carriage fees for the same.

As a reciprocal gesture, Bangladesh Delegation announced that a Doordarshan channel will be adopted on the soon to be launched DTH platform of Bangladesh.

A working agreement on cooperation between All India Radio and Bangladesh Betar was also agreed upon between the two countries, implementation of which would start from June, 2019.

The Indian Delegation also highlighted the strong network of Community Radio in both the countries and offered the services of Indian Institute of Mass Communication for the training of Bangladesh personnel, along with exploration of sharing of content and best practises in this field.