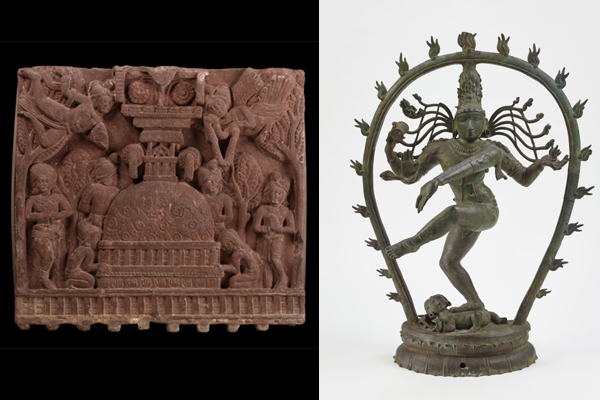 Indian art through the ages

It is natural that Washington, D.C. with its many museums and monuments, should offer visitors a comprehensive immersion into American history and culture. But it’s not just the American way of life visitors can discover. For instance, within the city’s Smithsonian museums, entries to which are always free, also lies an impressive, not-to-be-missed collection of Indian art. This diverse group of paintings, sculptures and photographs gives insight into ancient Indian dynasties and contemporary Indian life.

The Indian art collection lives in the Freer Gallery of Art and the Arthur M. Sackler Gallery, Smithsonian’s two museums of Asian art that neighbour each other along the National Mall. The galleries have now re-opened after extensive renovations.

Freer|Sackler, as the galleries are commonly known, categorises its collection by region. Indian art is part of the South Asian and Himalayan Art collection, which includes more than 1,200 objects from India, Pakistan, Bangladesh, Sri Lanka, Nepal, Bhutan and Tibet, ranging from the First century B.C. to the present.

“In our galleries, we seek to present artworks that came out of both religious and secular arenas. Our new galleries at the Freer will look at the ways different communities understood the body and how that manifested in artworks. On view will be Hindu, Buddhist and Jain sculptures, courtly paintings and luxury objects,” says Debra Diamond, curator of South and Southeast Asian art at Freer|Sackler.

A few highlights of Indian art in this selection:

From the 9th to the 13th century, the Chola dynasty was the dominant cultural, artistic, religious and political force in south India. Chola rulers commissioned elegant sculptures and majestic temples of Hindu deities, to proclaim the power and wealth of their dynasty. A “small but superb” collection of Chola bronze sculptures at the Freer gallery includes Shiva Nataraja, Nandi and the portrait sculpture of Queen Sembiyan Mahadevi as Goddess Uma or Parvati. The queen, known as a patron of the arts, focused on temple commissions. Her statue, “extraordinary in its grace,” offers “a rare glimpse of a powerful historical woman,” says Diamond.

The works in this collection rotate, “but we’ve always got a few masterpieces on view,” says Diamond. The artists who worked for the Rajput courts “made conscious decisions about styles and subjects, and their works helped to shape culture in western India,” she says. The Mughals “were globally connected. So, these works are always very interesting as springboards for thinking about the present,” adds Diamond.

Till  February 2018, the Freer gallery will put on view, what Diamond says is, “one of the only extant allegorical portraits” of Jahangir, the Mughal emperor. The subject of the painting is his “dream projection of dominance over Persia during a period when he’s vying with Shah Abbas for control of Qandahar,” which is part of present Afghanistan.

The Freer gallery also keeps on permanent display a knife made partially of meteoric iron for Mughal emperor Jahangir. “It’s the only surviving blade, of four,  that he had forged from a meteor that fell outside of Jalandhar in 1621,” informs Diamond.

This “very rare shrine of a Jain siddha [is] one of the most extraordinary objects in the museum,” says Diamond. It’s meant to show “a being that had transcended samsara [the cycle of death and rebirth]. So, the artist depicted the being as negative space, which is very conceptual, very profound,” she adds.

Diamond calls the more than 200 photographs by Indian photographer Raghubir Singh (1942-99) “the jewel of our collection.” It’s the “largest museum collection of works by this pioneering modern master of colour,” she says.

To see these and the other Indian and South Asian artworks, Diamond recommends visitors allocate at least 45 minutes to the Freer gallery and another 45 to the Sackler gallery. She also suggests visitors check with the galleries in advance regarding any special exhibitions on South Asia. For instance, from this October to June 24, 2018, Freer|Sackler is featuring a large installation, called “Terminal,” by Subodh Gupta, a contemporary multimedia artist based in New Delhi.

Diamond suggests a viewing strategy as well. Upon entering the Freer gallery, she suggests  one should take a quick peek into the doorways of all the galleries of Japanese, Islamic, Chinese and American art, so that, “when you enter the Indian galleries, you are struck immediately by how very distinctive the South Asian attitudes are toward the body. Indian artists told stories with the body, and they extolled its spiritual and physical beauty. It’s sensuous and transcendent at the same time, completely unique.”