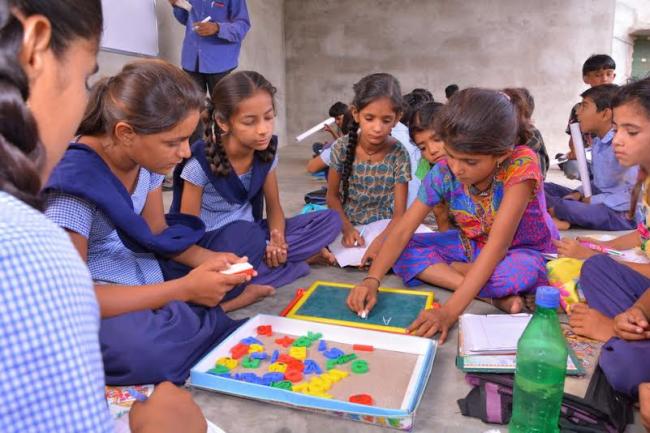 India Blooms News Service | | 26 May 2016, 01:54 pm
#Kolkata, # Kuheli Bhattacharya
Kolkata, May 26 (IBNS ):Kolkata girl Kuheli Bhattacharya was taking in the sights of the Rann Utsav in late December 2014 when she decided to explore the interiors of Bhuj in Kutch, Gujarat.

What the designer discovered was an abundance of talented women artisans with extraordinary skills but exploited, engaged to be married (on attaining marriageable age) within days or months of being born and with zero to nominal education.

Bhattacharya decided to stay put and arrange for round-the-year employment by upgrading their skills and also by providing them with basic literacy. Exposing them to the world outside Bhuj through exhibitions and fairs was also part of her agenda.

“The artisans had never ventured into hand embroidery on silk saris. The same is now being applied on gowns. Design wise, depicting India’s history and culture whether be it the grandeur of a Mughal wedding or the eternal love of Radha Krishna is something that I have tried to imbibe the artisans of Bhuj with. The colour combination of the fabric and design was also part of their syllabus,” Kuheli Bhattacharya said.

When the artisans learnt how to create unique hand embroidered garments including gowns, Bhattacharya started marketing their products and channelizing notional profits from sale of garments.

She also initiated welfare schemes for the gifted women of Kutch and their children and also decided to enhance her artisan base over a period of time. The villages where Bhattacharya works are Padhar, Lakhpat, Dhori, Dhaneti, Jhikri, Bhujodi,  Bhachau, and Sumrasar.

Bhattacharya plans to ultimately provide the hapless children with modern class rooms which are internet enabled and armed with proper teaching aids. This facility is currently under construction and will be ready by October this year.

Initially this project was limited to Gujarat but it plans to expand its base in West Bengal, Orissa, Bihar and Uttar Pradesh.

By 2017 Bhattacharya is planning to launch a store in Kolkata, where she plans to retail garments made in Kutch first from a multi-brand store. The designer will get her artisans to work on Bengal weaves like tussar, motka, silk at first and then bring Bengal stitches like Kantha into play.