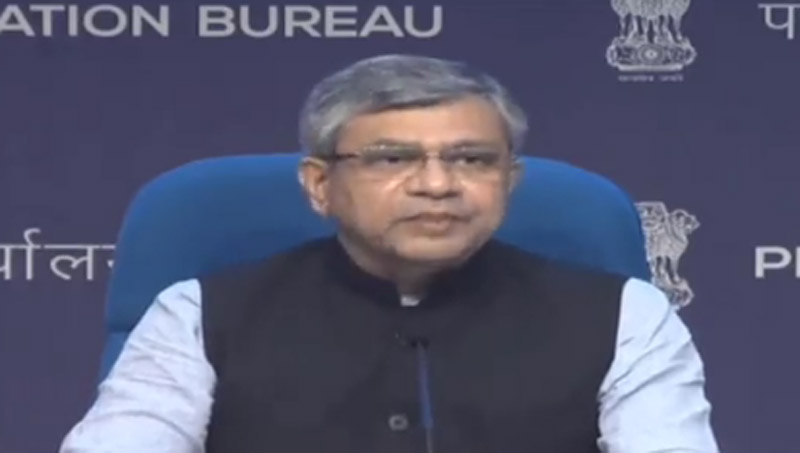 New Delhi/UNI: Offering a lifeline to crisis-ridden Vodafone Idea and also respite to other private telecom operators, the Union Cabinet chaired by Prime Minister Narendra Modi on Wednesday cleared the much-awaited relief package for the sector which includes moratorium on payment of spectrum dues.

"A four year moratorium has been given for all dues of telecom service providers," Telecom Minister Ashwini Vaishnaw said on Wednesday.

"It is also important to save government revenue, so an interest on the moratorium will have to be paid. This will reduce the stress of cash flow in the industry," he said announcing a series of structural reforms in the telecom sector.

Asked about the total cost of the package, the minister said it was "revenue neutral" for the government.

"We have to look at this reform from the perspective of this industry, the reforms are structural and they are going to make a difference. It is going to give a sustainable growth to the industry. The package is revenue neutral to the government, there is no number to the amount of the package," he said.

Among the three private telecom players, Vodafone Idea Ltd (VIL) is facing an existential crisis and their closure would mean duopoly in the industry besides a considerable bearing on its employees, subscribers, banks and associated industries.

"Given the precarious position of the balance sheet of VIL, material external support (primarily Government) might be necessary. The support can be in the form of deferment of spectrum dues, reduction in levies, reduction in interest rates, etc," the research and rating firm ICRA had said on September 6 in a note.

Kumar Mangalam Birla, ex-Chairman of Vodafone Idea, had earlier written to the Cabinet Secretary offering his stake in the company to the government or any entity approved by it for free. He later quit as Chairman of the debt-laden telco.

Vodafone Idea had a total debt of Rs 1,90,000 crore as of June 30 which includes deferred spectrum payment obligations of 1,06,000 crore and an adjusted gross revenue liability of Rs 62,180 crore.

Another major player Bharti Airtel has also been under financial pressure. The company Chairman Sunil Mittal recently said that there is “tremendous stress in the telecom sector” and tariffs need to go up soon.

“To say telecom industry is in a bit of trouble is actually an understatement. It is in under tremendous amount of stress," Mittal had said during an investor call.

The telecom industry has been facing headwinds ever since Mukesh Ambani-led Jio launched operations and unleashed a tariff war that resulted in revenue and profits for telcos. The Adjusted Gross Revenue (AGR) penalty added to the woes of the industry.