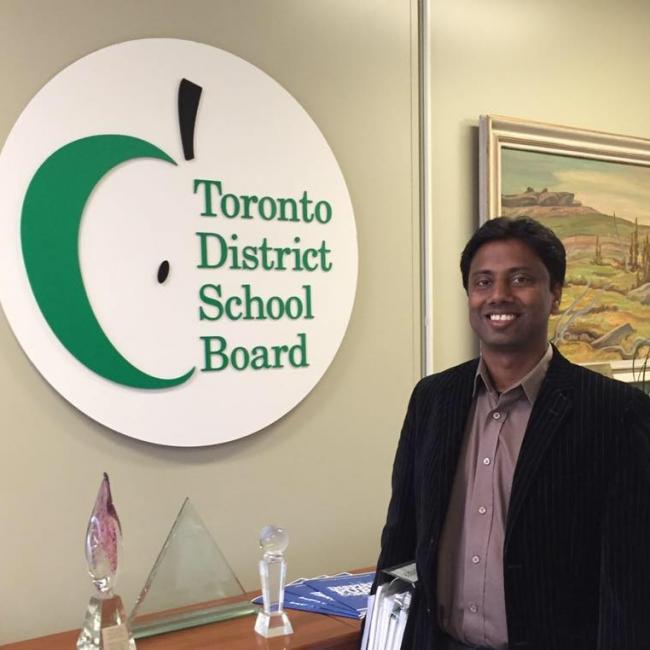 He believes, to lead a life of pride, children belonging from the diverse ethnic groups and communities need to feel equal along with their peers. The equality in education, the learning matter is most important, according to Shan’s campaign.

Shan came to Canada years back as a refugee immigrant. He voiced himself in a number of academic roles starting as a pupil, to a teacher to presently a trustee of the School Board.

“It is this disparity among the students of different ethnic backgrounds and those of the Canadian students that the present education pattern should be directed to”, said Shan.

Talking about literacy Shan said that the TDSB has achieved its targets but Mathematics is the one lagging behind. Shan said “the present curriculum should inculcate Mathematics in every aspect of the education so that the graduates of the school can soon be absorbed into different job markets easily”.

He adds, “Making Mathematics fun should be the ultimate one. Instead of differentiating between a group of students who love and hate Maths, the importance of Maths is such that it should be inculcated in all subjects.”

“For example, if you are studying history, maths should be involved to answer things to support history. Whether you are learning languages, or arts, maths is important and the academic structure should involve it so all children can get a know-how of the subject without fearing it,” explains Shan.

Shan stressed that the school education system should be able to identify the barriers obstructing the students progress and help in the eradication of bias system in the school.

The environment of the school, continued Shan should be to nurture the relationships among students and between students and the staff. Shan stressed that staff, students, and parents/guardians should work with the communities, the city and the province together to build action plans for schools that helps eliminate barriers to success.

“Systemic racism and discrimination among students should be removed in a positive way to create a healthy environment in which the development of the students and their personalities should be nurtured so that these students are well equipped to make informed decisions about their future and become good citizens”, stressed Shan.