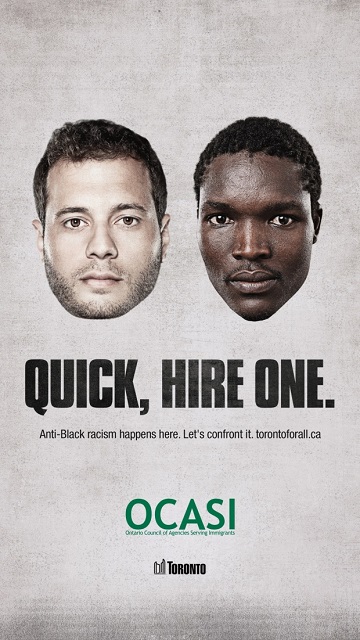 The new campaign will be visible in different bus shelters along the city’s transit system.

The posters targeted to urge people to come out of their racial prejudices, shows a black man alongside a white man and asks a question “Which one would you hire?”

The campaign called “Toronto for All” is led by the OCASI executive director Debbie Douglas.

She however does not expect the ads to change the systemic racism in the country, but believes the ads will help in raising awareness among Torontonians to join the fight against racism.

She says, "Anti-black racism happens on a daily basis ... in all of our lives.”

Debbie, retells her own experiences being a black woman all her life. "In my own life, it's everything from walking into a high-end store and being approached right away and told how expensive the goods are. It's walking in to do a keynote address and it's assumed that I'm a student who's walked into the room."

The transit is also not free of racism, says Douglas. "I watch how black students are over-policed in terms of having to prove school identity if they're using a student card as TTC (Toronto transit Commission) fare."

Apart from hiring, Douglas also points out that racism continues in offering an apartment on rent to people based on their colour. Many landlords prefer to rent their apartment to white skinned people than that to a black family or a black man or a black woman.

A similar campaign was launched by OCASI, last June to target bigotry against Muslims, after attacks on women wearing hijabs and negative comments kept pouring against newly settled Syrian refugees.

(Reporting by Debarati Mukherjee with additional inputs from CBC news)