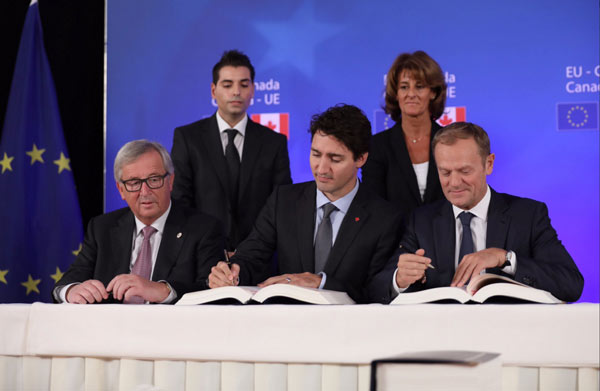 Prime Minister Justin Trudeau inked this historic development in the august company of the presidents of the European Council and European Commission, Donald Tusk and Jean-Claude Juncker.

Trudeau in a news conference said, "The fact that throughout people were asking tough questions of a deal that will have a significant impact on our economies, and giving us the opportunity to demonstrate that impact will be positive, is a good thing.”

Trudeau apprehended the deal would have been signed weeks ago, but unexpected opposition from the Belgian region of Wallonia, almost marred the possibilities of entering into a firm deal.

Chrystia Freeland, International Trade Minister of Canada accompanied Trudeau to Belgium and described it a great day for Europe. "It shows that Europe can do trade deals," Freeland retorted to reporters as she made her way to the European Council following the prime minister.

A few weeks back, Freeland opted out of talks in Belgium, apprehending EU was incapable of signing a fair doable agreement.

During a photo opportunity after the iconic deal was signed, Freeland finally said, "OK we did it!".

The supporters of the deal say it will amp up the existing trade by billions through revised cuts in tariff across various sectors from agriculture, pharmaceuticals to the auto industry.

Yet, the opposition raised by the anti-trade activists and the left wing political parties in some European countries, were fierce enough to block the deal from shaping up at all.

Despite the success of the deal, a small vocal group of protesters at the European council banged drums and threw red paint at EU staffers, to showcase their disapproval.

The Paul Magnette, socialist regional government of Wallonia, started the anti-CETA protest which was earlier doing rounds in parts of France, Germany and Austria.

Finally on Friday, CETA was freed by the Wallonia government after it voted to withdraw its opposition, leading Trudeau to come over and sign the deal. It all happened after a week of rigorous talks in Europe, following Freeland’s emotional exit.

"That leadership that we were able to show between Canada and Europe is not just something that will reassure our own citizens but should be an example to the world of how we can move forward on trade deals that do genuinely benefit everyone," Trudeau said.

However, there were a few obstacles in the way of the prime minister before he could finally reach Brussels. His flight had a mechanical problem forcing his plane to return to Ottawa about 30 minutes after it took off on Saturday night. After more than an hour on the ground, the flight set off once more and fortunately continued on to Belgium without any further incident.

However, with the Liberals and Conservatives both favouring the deal, its approval will sail through Parliament unopposed.

But Europe is another matter.

The European Parliament must accredit CETA, and Trudeau's meeting with Schulz, a German social democrat, is part of the government's ongoing efforts to win support there.

90 percent of the deal would come into force only after the European Parliament's approval, along with Canada's, under what is called provisional application.

But in the next few years, the deal must be confirmed by the EU's 28 countries and several other smaller regional governments like Wallonia. Experts, however foresee, that process could take years, and could be derailed too.

Osgoode Hall law professor, Gus Van Harten, an expert in trade, believes the European Parliament will likely approve the deal, but the foreign investor protection mechanism will probably bring in problems in the future.

He reasons, owing to national and regional governments having the ability to block it, the provisional application of the deal can be detained.

"The inclusion of the foreign investor protection system in the CETA was a dubious decision and political gamble from the start, and it has now blown up in a lot of faces," said Van Harten. "CETA as a whole remains in jeopardy regardless of signature."

Sunday however, was not the first time Brussels witnessed the spectacle and context of a CETA signing ceremony.

Again, in September 2014, Harper hosted Barroso and at another signing ceremony in Ottawa to mark the end of talks.

But while they were busy celebrating in Ottawa, the seeds of displeasure with the investor protection chapter were blossoming in Germany.

Sooner, with the Liberals in power a year later, German Vice Chancellor Sigmar Gabriel -- a major opponent of that chapter -- would find himself working with Freeland to strengthen that section of the agreement. They ultimately succeed, and celebrated their accomplishment as the final step forward needed to push CETA across the finishing line.

However, the picture did not remain so rosy as the Walloons brought in another set of hurdles for the Liberal government to finalize the long standing deal.

"They've really taken up the concerns of many groups in Europe," said Stuart Trew from the Canadian Centre for Policy Alternatives.

"The Wallonia government appears to have taken those quite seriously."