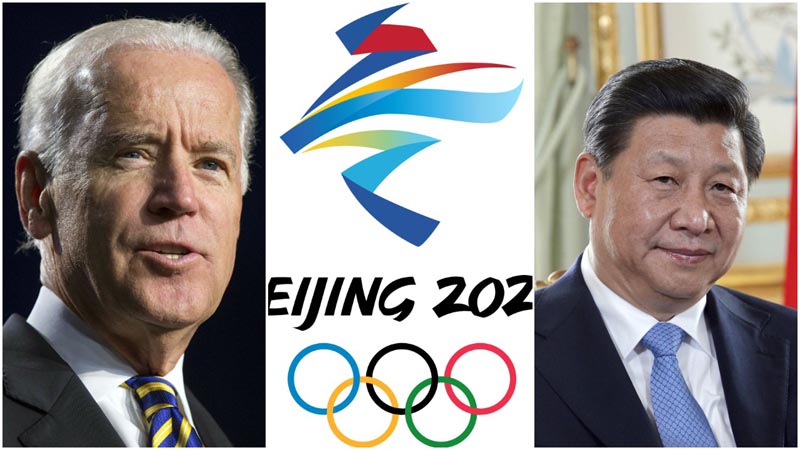 Washington: The US government will not send an official US delegation to the 2022 Winter Olympics in Beijing as a protest against China's 'ongoing genocide and crimes against humanity in Xinjiang and other human rights abuses ',White House press secretary Jen Psaki announced on Monday.

US athletes will still be allowed to compete in the Olympics, but the administration will not be sending government officials to the games. The same policy applies for the Paralympic Games, which are also taking place in Beijing, reports CNN.

"The Biden administration will not send any diplomatic or official representation to the Beijing 2022 Winter Olympics and Paralympic Games given the PRC’s ongoing genocide and crimes against humanity in Xinjiang and other human rights abuses," Psaki said during a press briefing.

"The athletes on Team USA have our full support.  We will be behind them 100 percent as we cheer them on from home.  We will not be contributing to the fanfare of the Games," she said.

"U.S. diplomatic or official representation would treat these Games as business as usual in the face of the PRC’s egregious human rights abuses and atrocities in Xinjiang.  And we simply can’t do that," she said.

The official said: "As the President has told President Xi, standing up for human rights is in the DNA of Americans.  We have a fundamental commitment to promoting human rights.  And we feel strongly in our position, and we will continue to take actions to advance human rights in China and beyond."

Apart from the US, New Zealand also announced its government would not send any ministers to the Winter Olympic Games.

Sport Minister Grant Robertson was quoted as saying by Stuff that this decision was due to a “range of factors but mostly to do with Covid and the fact that the logistics of travel and so on around Covid are not conducive to that kind of trip”.

Meanwhile, reacting to the decision taken by the US, the Chinese Foreign Ministry said the Winter Olympic Games is not a stage for political posturing and manipulation.

"The US should adopt a right attitude, act in accordance with the Olympic spirit of 'together', treat China’s concerns seriously, and avoid politicizing sports. It should stop hyping the so-called 'diplomatic boycott' of the Beijing Winter Games, lest it should affect bilateral dialogue and cooperation in important areas. If the US is bent on having its own way, China will take resolute countermeasures,"  Foreign Ministry Spokesperson Zhao Lijian said during a press conference.

The US and China have exchanged barbs over numerous issues in recent times.