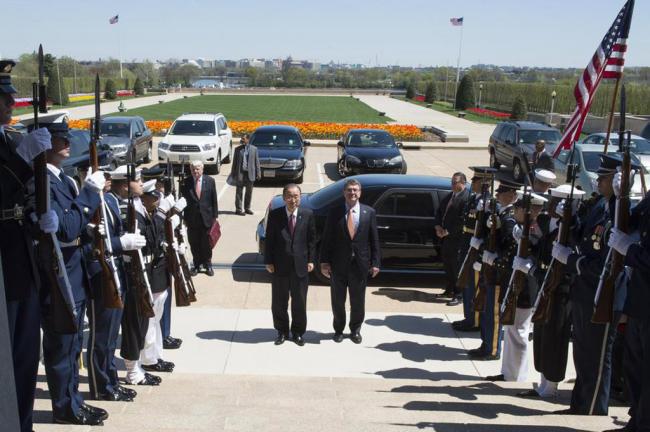 India Blooms News Service | | 17 Apr 2015, 09:15 am
#Washington: UN chief meets US Government officials
New York, Apr 17 (IBNS): United Nations Secretary-General Ban Ki-moon is in Washington, D.C. on Thursday where he is meeting with members of Congress and other Unites States officials to discuss the crises in Yemen and Syria and other pressing global issues, including Ebola and climate change.

Ban’s spokesperson in New York announced that the UN chief has met with members of the US House Foreign Affair Committee and discussed the Organization’s work on many issues of mutual concern, including Ebola, climate change, Syria and Yemen.

The Secretary-General is expected to raise those and other issues this afternoon when he meets with members of the Senate Foreign Relations Committee. Thus far, Ban has had a working lunch with the United States Defense Secretary, Ashton Carter.

This evening, the Secretary-General will speak and take questions at the National Press Club, which is expected to be broadcast live on C-Span and UN WebTV.