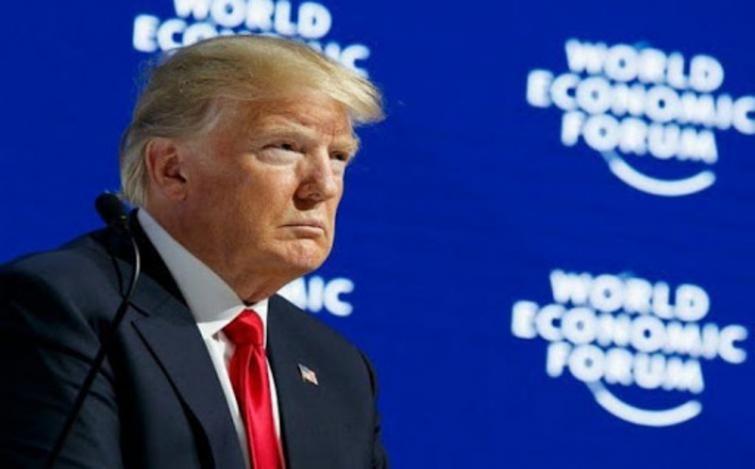 Washington/Sputnik:US President Donald Trump in his annual address to Congress called for immigration reforms and ending foreign wars, although the most notable aspect of the night was the palpable tension in the air on the eve of a historic impeachment vote.

The annual US State of the Union is an opportunity for a president to outline his or her agenda to the Congress while underscoring the administration’s achievements.

Trump delivered the address before a joint session of Congress shortly after 9:00 p.m. EST on Tuesday (2:00 a.m. GMT on Wednesday). The speech, which Trump delivered at the House of Representatives building, lasted about one hour and 20 minutes, including interruptions for applause.
Tense Atmosphere

The address comes amid an impeachment trial against Trump that could wrap up on Wednesday with a possible vote to acquit in the Republican-majority Senate. Trump is the second president in US history to deliver a speech during impeachment, joining Bill Clinton who faced a similar situation in 1998.

Some two hours before the event, dozens of anti-Trump protesters gathered right on Pennsylvania Avenue near the Capitol, a few blocks of which were closed to traffic. Awaiting Trump’s motorcade, protesters held banners reading "Impeach, Remove," along with "State of Obstruction," and "Cover Up," among others.

When Trump took the stage many in the audience chanted "Four More Years," while the Democratic lawmakers were seen standing in silence.The US media immediately pointed out that US House Speaker Nancy Pelosi did not introduce Trump in a traditional way. Usually the speaker says, "I have the high privilege and distinct honor" to introduce the president. Instead, Pelosi simply said, "Members of Congress, the president of the United States."

After the US president handed folders with his speech to Vice President Mike Pence and Pelosi, Trump seemed to ignore the speaker’s outstretched hand. Then, near the end of the address, Pelosi, who sits immediately behind the president during the speech, tore his speech up for a national television audience to clearly see.

US Supreme Court justices, the Joint Chiefs of Staff, and diplomatic corps attended the event along with guests of the president. The president’s cabinet attended the speech except for one who remained off site to ensure continuity of government in case of a catastrophe. This year’s designated survivor was Interior Secretary David Bernhardt, according to the White House. Security/Foreign Policy

The US president said the administration was working to end America’s wars in the Middle East as well as the conflict in the South Asian country of Afghanistan.
"In Afghanistan, the determination and valor of our warfighters has allowed us to make tremendous progress, and peace talks are underway,

" Trump said during Tuesday night’s speech. "We are working to finally end America's longest war and bring our troops back home."

Trump said he is not looking to kill hundreds of thousands of people in Afghanistan, many of them innocent. He also said the United States cannot serve as a law enforcement agency for other countries.

Trump said due to "powerful" US sanctions, Iran’s economy is doing very poorly. The United States, Trump claimed, could help Iran recover in a short period if they were not "too proud or too foolish."

The US president noted that recently the United States for the first time in 70 years created a new branch of the armed forces called the Space Force. Trump then asked Congress to fully fund the Artemis program to ensure that the next man and the first woman on the moon will be American astronauts.

NASA’s Artemis program hopes to send US astronauts to the moon by 2024 to establish the ground for launching a mission to Mars.Trump had a number of special guests attend the event including Venezuelan opposition figure Juan Guaido, whom he hailed during the speech. Guaido seemed to garner bipartisan approval. Trump said Venezuelan President Nicolas Maduro's "grip of tyranny will be smashed and broken."

Maduro has accused Guaido, who tried to declare himself interim president last January, of collaborating with Washington to orchestrate a coup to control Venezuela’s natural resources.Immigration Trump said his administration was working on overhauling America’s immigration system.

"We are working on legislation to replace our outdated and randomized immigration system with one based on merit, welcoming those who follow the rules, contribute to our economy, support themselves financially, and uphold our values," Trump said Tuesday night.

Trump also called on Congress to pass legislation to allow victims of crimes committed by illegal immigrants to sue sanctuary jurisdictions.
Jurisdictions dubbed "sanctuary cities" limit cooperation with federal agencies in locating and deporting immigrants who allegedly entered the United States illegally.US Congress, he added, must pass legislation to deny illegal immigrants free government healthcare. Trump took the moment to sell his master project to erect a wall on the southern border."As we speak, a long, tall, and very powerful wall is being built. We have now completed over 100 miles and will have over 500 miles fully completed by early next year," Trump said.Health

During the speech Trump announced that the United States is working with the Chinese government on the Coronavirus outbreak.

Trump said his administration would take all necessary steps to safeguard US citizens from this threat.
Trump thanked Congress for funding some of his requests on health initiatives including child medications and made a dramatic announcement on combatting AIDs.

"We will eradicate the AIDs epidemic in America by the end of this decade," Trump said Tuesday night.Trump promised to "immediately" sign legislation to dramatically lower prescription drug prices if Congress can pass it. Economy, During the start of his speech, Trump noted many economic indicators that he said his administration is responsible for.

"Since my election, we have created 7 million new jobs… The unemployment rate is the lowest in over half a century," Trump said in a transcript of the speech released before the address.

Trump pointed out that the United States is experiencing historic lows in unemployment among a number of demographics including African-Americans, Latinos, the disabled and women. He also said the poverty rate for African-American was the lowest it has been on record.

Trump said since he took office the net worth of the bottom half of wage-earners has increased by 47%. Meanwhile, the US stock market rose 70 percent, adding more than $12 trillion to the nation’s wealth.And Trump administration regulatory reductions, he said, allowed the United States to become the number one producer of oil and natural gas in the world.Awards/Recognition.

Trump during the address presented the Presidential Medal of Freedom, the highest civilian award given in the United States, to conservative political radio host Rush Limbaugh, who is dying of cancer. In addition, Trump recognized a 100-year-old World War II veteran who was one of America’s first black fighter pilots.

"On December 7th, Charles celebrated his 100th birthday. A few weeks ago, I signed a bill promoting Charles McGee to Brigadier General," Trump said during the speech. Trump noted that McGee is one of the last surviving Tuskegee Airmen - the first black fighter pilots.