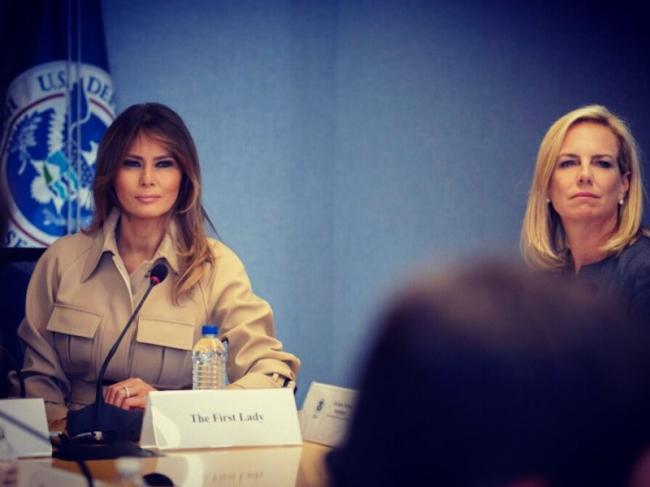 Washington, Jun 18 (IBNS): The First Lady of the United States of America, Melania Trump, has joined others in slamming the new US child migrants policy that severs family who enters the country illegally.

According to the First Lady's spokesperson, she 'hates to see children separated from their families'.

Like many prominent personalities in the US, Melania is also batting for a successful immigration reform.

The policy has also been trashed by former First Lady Laura Bush, who has called it 'immoral'.

"This zero-tolerance policy is cruel. It is immoral. And it breaks my heart," Bush wrote in The Washington Post.

In a no-holds-barred attack, she added, "Our government should not be in the business of warehousing children in converted box stores or making plans to place them in tent cities in the desert.

"These images are eerily reminiscent of the Japanese American internment camps of World War Two, now considered to have been one of the most shameful episodes in US history," Bush said.

The new policy places adults who try to enter into the USA by illegal means in criminal custody.

The move has affected nearly 2000 families within six weeks.

Urging the US government to be compassionate, Melania said, "We need to be a country that follows all laws, but also a country that governs with heart."

While many have blamed the present Republican government and President Donald Trump for the mismanagement, the latter has pinned it on Democrat lawmakers.

"Democrats can fix their forced family breakup at the Border by working with Republicans on new legislation, for a change! This is why we need more Republicans elected in November. Democrats are good at only three things, High Taxes, High Crime and Obstruction. Sad!" he tweeted on Saturday.

However, political analysts have said that the rule change does not require a congressional action and can be done by the Trump Administration alone, thereby effectively negating his claims.

Meanwhile, the situation has foster homes in limbo, as most are running out of space to shelter the detained individuals