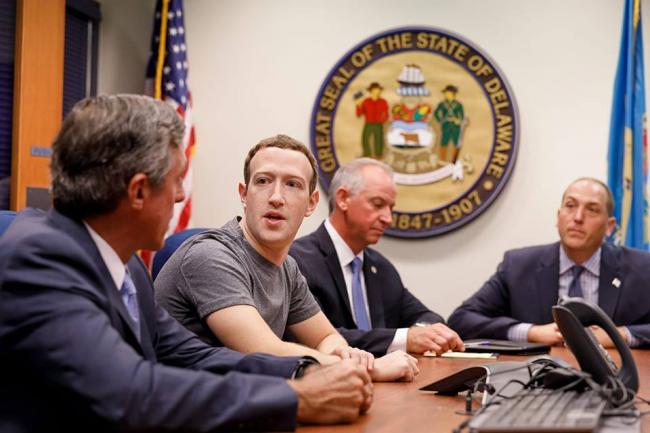 New York, Apr 11 (IBNS): Facing the US Senators, Facebook chief Mark Zuckerberg has apologised for the data leak of  tens of millions of social media users.

He informed that his company is engaged in a constant battle with Russian operators who sought to exploit the social network founded by him more than a decade ago.

Taking responsibility and apologising over the entire episode of data leak that has hit Facebook, Mark was quoted as saying: "It was my mistake, and I'm sorry."

He said, "I started Facebook, I run it, and I'm responsible for what happens here."

"It's clear now that we didn't do enough to prevent these tools from being used for harm," he said while testifying before a joint Senate Judiciary and Commerce Committees.

Speaking on the 'arms race' against Russian disinformation, the Facebook chief said: "This is an arms race. They're going to keep getting better."

Mark also highlighted the issue of upcoming general elections in India and Pakistan and said his company will try to do everything to ensure the safety of these polls.

"2018 is an important year for the whole world. Several countries like India, Pakistan will have elections. We'll do everything possible to ensure these elections are safe," he said.

Interestingly, Lok Sabha polls are scheduled to take place in India next year.

According to him, Congress was also a client of CA.

"They (Cambridge Analytica) worked extensively in India. They have an office in India... I believe their client was Congress but I know that they have done all kinds of projects. I don't remember a national project but I know regionally. India's so big that one state can be as big as Britain. But they do have offices there, they do have staff," Wylie was quoted in media as telling lawmakers under oath.

Whistleblower Christopher Wylie had previously quoted the figure at 50 million.

The saga surfaced after Cambridge Analytica were named in an investigative report by Britain's channel 4, in the month of March.

The firm was accused of harvesting data of up to 50 million Facebook users without permission and using them to help politicians.

According to Wylie, among the political parties which benefited from the CA was the Indian National Congress.

The revelation came after India's Law and Justice and Information-Technology Minister, Ravishankar Prasad, had alleged that the Congress has links with Cambridge Analytica.

Reports in the Times of India have further stated that  CA used these data to "psychologically profile people and deliver material in favour of Donald Trump during the 2016 US presidential elections."

According to reports, Facebook lost around USD 58 billion in the month of March.