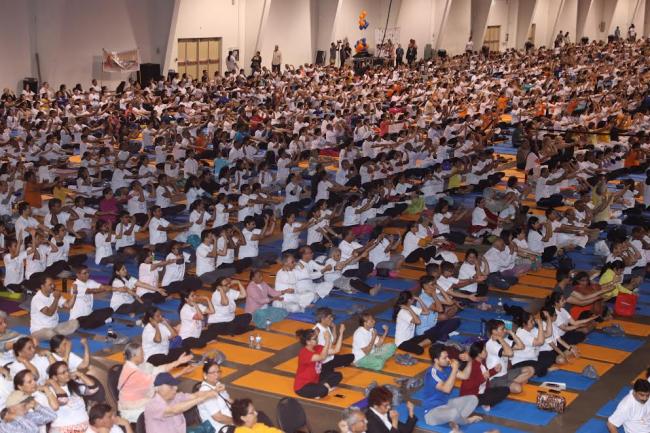 IYDC, in association with the Consulate General of India in Toronto, organized the celebration.

IYDC, a Canadian not-for-profit organization, formed in 2015 with the aim of teaching the benefits of yoga to Canadians had been successful, for the first time in three years, in bringing together all organizations promoting yoga, under one banner.

The event was partnered by cities of Brampton, Markham and Richmond Hill. Satish Thakkar, Chair of the IYDC organizing committee, emphasized that the purpose of the celebrations was to celebrate UN’s 3rd International Day of Yoga and to raise awareness about the benefits of Yoga in Canada.

He said that yoga is  widely acknowledged for positive impact on health. It can also directly contribute to the nation’s happiness and creativity.

International Centre in Mississauga, where the yoga sessions were held, attracted a large number of yoga enthusiasts from across the Greater Toronto Area and was the largest assembly of yoga practitioners at a single venue in North America, according to media reports.

Baba Ramdev, while taking the three-hour yoga session, demonstrated the yoga exercises and proper techniques while his commentaries were peppered with witty remarks.

Said the popular Yoga guru, “India’s ideology and principle is yoga and spirituality. India is doing yoga today and the world will follow it tomorrow."

He further added that Indian Prime Minister Narendra Modi is not only the biggest patron of yoga but practices yoga every day.

Baba Ramdev is also the founder of the Patanjali Group is also well known for his work in Ayurveda.

He has about 800 million followers, including celebrities such as Amitabh Bachchan and Shilpa Shetty. 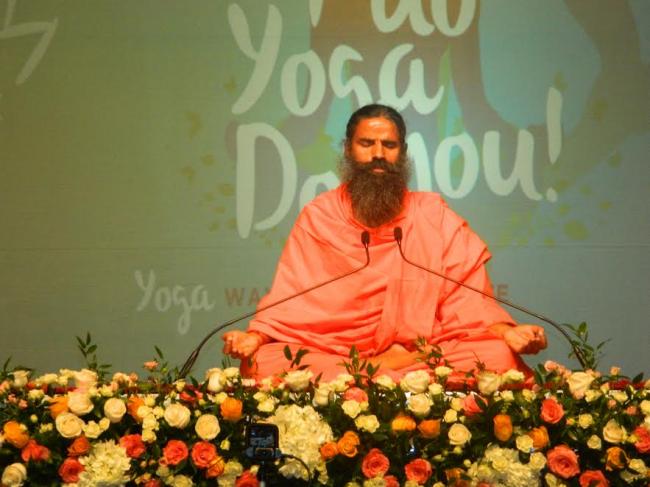 In 2016, popular American business magazine “Fast Company” featured him in their Top 100 Most Creative People in Business.

“Raj yoga is more than merely physical exercise, it is the yoga of mind that lays emphasis on being aware of one’s state of mind. Through the practice of awakening and sustaining a spiritual awareness, one learns to calm the mind and increase one’s inner resources and overall sense of wellbeing,” she said.

Sister Shivani who is associated with the Brahma Kumaris World Spiritual University since 1995 is an Indian spiritual teacher as well as an inspirational speaker. Her  television series like “Awakening with Brahma Kumaris” Rajayoga Meditation, Emotional Intelligence and Practical Spirituality had won her popularity.