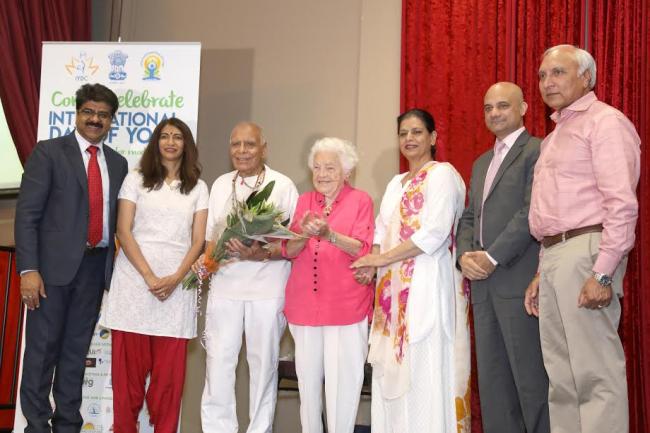 Yoga is the best and most risk-free fitness option for seniors: Dinesh Bhatia

This year marked the 33rd annual Seniors’ Month and its theme is ‘Living Your Best Life.’

Satish Thakkar, the Chair of Board of Directors of IYDC spoke about the unique outreach program followed by Hazel McCallion’s commencement of the practice of yoga underlining the adage ‘It’s never too late to start yoga’.

At this special session called ‘Stay Healthy. Do Yoga’ held at Sringeri Temple, Etobicoke, a 93-year-old Yoga Master, Dr. Madan Bali, from Montreal, was also honoured for his lifelong dedication to yoga.

Dr. Madan Bali President of the Indo Canadian Seniors Foundation of Quebec, who had been practicing yoga for the last 50 years, had been a role model for the seniors, said Thakkar.

With a goal to bring yoga under health care to reduce public expenditure on health and improve economy, Dr. Bali stated, “I have a mission is to promote yoga to create optimal health, happiness, healing in everyday life.”

Dipika Damrela, Ontario’s Minister for Seniors Affairs, said that The Ontario Ministry of Seniors Affairs collaborated with the IYDC to raise awareness about yoga’s benefits.

Dinesh Bhatia, the Consul General of India in Toronto, Honorary Chief Patron and the Chair of the Advisory Board of IYDC, said, “Yoga is the best and most risk-free fitness option for seniors,” and added that the purpose of the seniors’ program was to create awareness about the benefits of yoga among the seniors.