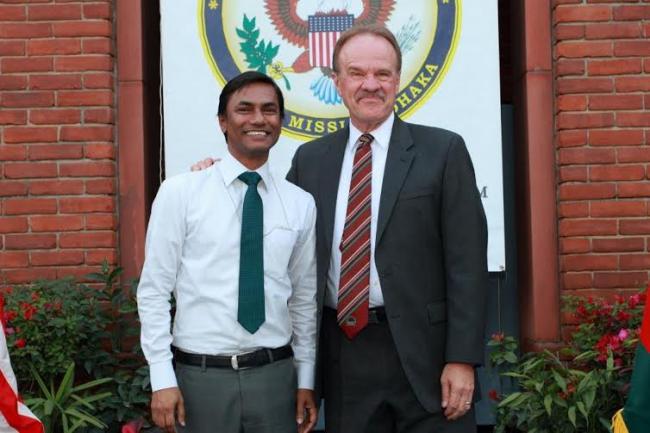 The incident occurred in Kalabagan area of the city on Monday. ‘Ansar Al Islam’, a suspected militant group published two separate messages on their Twitter account and claimed responsibility for the killings.  Xulhaz Mannan, 35, the editor of Roopbaan, Bangladesh’s first LGBTI magazine, and his friend, Tanay Mojumdar, were both hacked to death after a group of attackers posed as couriers to gain entry to Mannan’s apartment. Two cases have been filed in connection with the murders in Kalabagan police station. Xulhaz Mannan was an employee of the USAID. U.S. Secretary of State John Kerry said those responsible for the murders should be brought to justice. "Deplore brutal murder of @USAID local staff member and another Bangladeshi advocate in Dhaka. Those responsible must be brought to justice," Kerry tweeted. The USAID condemned the attack and said in a statement: "Today, USAID lost one of our own. On behalf of our entire team, I send our deepest condolences to the family, friends, and colleagues of USAID Foreign Service National Xulhaz Mannan, who was brutally murdered in Bangladesh today. We condemn this cruel and inhumane act of violence and add our voices to all those calling to bring his cowardly attackers to justice." "From an early age, Xulhaz demonstrated a passion for helping others - a passion that would grow throughout his life. He was the kind of person willing to fight for what he believed in, someone ready to stand up for his own rights and the rights of others. A dedicated and courageous advocate for human rights, Xulhaz sought to shape a society that was more diverse and inclusive. He believed in the people of Bangladesh, and he strove to make the world a better place for everyone," read the statement. "This tragedy reminds us of the deep commitment and sacrifice of USAID staff serving in countries around the world, and the bravery of all those fighting for a better world. Xulhaz is survived by his brother and his mother, and friends in Bangladesh and around the world who mourn this great loss. Our thoughts and our hearts are with them at this tragic time," it said. US State Department Spokesman John Kirby called the attack as 'barbaric'. "We are outraged by the barbaric murder of @USAID employee & human rights activist Xulhaz Mannan, beloved by @usembassydhaka," he tweeted. "Mannan was a courageous advocate & editor of an LGBT magazine in #Bangladesh. Our thoughts & prayers are with all of the victims & families," he said. Former British High Commissioner to Bangladesh  condemned the killings and tweeted: "Horrified & condemn the senseless murder of my friend and #humanrights activist #Xulhaz. Perpetrators must be brought to justice."