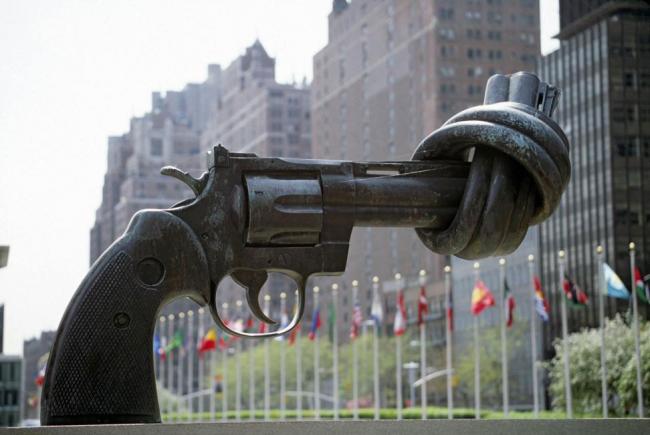 India Blooms News Service | | 03 Oct 2015, 08:56 am
#Mahatma Gandhi, # Ban ki-moon, # UN
New York, Oct 3 (IBNS): United Nations Secretary-General Ban Ki-moon on Friday called for a renewal of the commitment to non-violence and lives of dignity for all, noting that the example set by Indian independence leader Mahatma Gandhi is relevant now as it has ever been.

“Today, at a time of escalating conflicts, rising extremism, massive displacement and rapidly growing humanitarian need, Mahatma Gandhi’s dedication to non-violence remains an example for us all,” Ban said at a special event held at UN Headquarters to mark the International Day of Non-Violence.

“The Day is observed annually on 2 October, the birthday of Mr. Gandhi, who pioneered the philosophy and strategy of non-violence.

"Gandhi proved that non-violence – the principle and the practice – can change history,” Ban noted.

He added, “His mass campaigns of non-violent civil disobedience helped pave the way for the independence of India, and have inspired countless movements for change across the world.”

During an official visit to India in January, the UN chief visited Sabarmati Ashram, which houses a library and museum chronicling Gandhi’s life, work and teachings.

“We will succeed only if the memory of Gandhi's unyielding fight against injustice burns bright in our hearts and we defend his ideals every day of the year,” he had said on the occasion.

“In a separate message for the International Day, the Secretary-General added: “Gandhi showed the power of peacefully opposing oppression and hatred. He showed how cooperation and tolerance can prevails over injustice. He demonstrated the great value of the rule of law in breaking vicious cycles of vengeance.”

“The General Assembly established the commemoration of the Day in June 2007 as an occasion to “disseminate the message of non-violence, including through education and public awareness.”