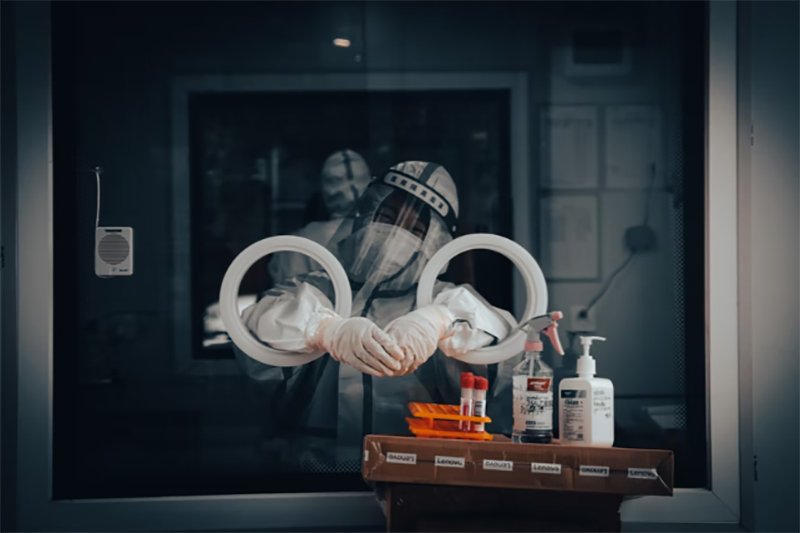 Beijing: Reuters reports that Chinese health regulators have authorized TCM medications, including the Lianhua-Qingwen capsules, for use by Covid patients despite a lack of valid clinical evidence.

Millions of cartons of TCM products were supplied to citizens across Shanghai earlier this month, the heart of China's current Covid crisis. During the city's rampant fifth wave of COVID-19 infections in March, Lianhua-Qingwen was also distributed to all Hong Kong households.

Lianhua-Qingwen, which contains 13 components including rhubarb, honeysuckle, and apricot kernel, was created in 2003 to treat severe acute respiratory syndrome (SARS), according to the South China Morning Post.

However, in a story picked up by state media on Sunday, prominent Chinese health platform Dingxiang Yisheng reported the capsules, created by Shijiazhuang Yiling Pharmaceutical, could not prevent instances of the virus.

The equities hit the daily limit of 10 percent on the Shenzhen exchange after a sharp drop on Monday, plummeting to 32.39 yuan (US$5).

After reports questioned the efficiency of tablets certified by the government as a coronavirus cure, shares of one of China's top traditional medicine makers plummeted on April 18.

As the cities confront their biggest COVID-19 outbreaks since the pandemic began, Shanghai officials have joined their Hong Kong counterparts in dispensing "Lianhua-Qingwen," a herbal treatment promoted for fever and sore throats.

Last week, Wang Sicong, a social media star and the son of one of China's wealthiest scions, sparked a conversation on Weibo by reposting a social media video questioning whether the WorldHealth Organization had ever recommended the medicine for use against COVID-19.

After questioning the efficacy of a traditional Chinese medication (TCM) recommended by Beijing to treat moderate Covid cases, the influencer son of a Chinese billionaire has been barred from blogging on China's Twitter-like Weibo platform.

A statement on Wang Sicong's Weibo account, which has more than 40.5 million followers, states, "The user is currently banned for violating relevant laws and regulations."

The 34-year-old is the son of real estate magnate Wang Jianlin, who was formerly China's richest man and is known for flaunting his opulent lifestyle online.

The influencer's now-deleted postings about LianhuaQingwen pills, a popular herbal remedy used to treat Covid, are thought to be the reason behind the suspension as per reliable sources.

According to Bloomberg, Wang released a video last week inquiring if the medicine has ever been suggested as a Covid therapy by the World Health Organization.

The American news source Quartz reported that shares of China-listed Shijiazhuang Yiling fell 10 percent on Tuesday and another 10 percent the next day.

Even though the pills are being increasingly marketed by government officials in China and Hong Kong, the United States and other nations have warned that there is no evidence that the drug works to prevent or cure coronavirus.

Lianhua-Qingwen has not been authorized by the US Food and Drug Administration, which states that coronavirus-related claims are "not supported by competent and trustworthy scientific data."

Beijing authorized the medicine as a coronavirus therapy way back in 2020, after it was originally designed for the severe acute respiratory syndrome (SARS) and was made up of substances including honeysuckle and apricot seeds.

Boxes of Lianhua-Qingwen pills have been included in government care packages in Hong Kong and Shanghai, which are fighting to contain fast-spreading Omicron-fueled surges.

Shanghai, China's largest metropolis, has been closed since March as the number of cases has surpassed 25,000 per day - a modest number compared to other regions of the world, but nearly unheard of under China's "zero-Covid" plan.

In March 2022, during the height of its Omicron-driven outbreak, Hong Kong had one of the highest virus-related fatality rates in the world.

Medical specialists are concerned about Hong Kong's advertising of the tablets, saying there is little or no scientific proof that LianhuaQingwen is a viable therapy for COVID-19. They argue that Hong Kong's concentration on TCM therapies diverts attention away from what should be the city's top priority: immunizing the elderly.

Yanzhong Huang, a senior associate at the Council on Foreign Relations for global health, claims that Hong Kong's popular support for TCM is motivated by a desire to please mainland officials, who indirectly dominate city affairs, and has nothing to do with science. "Right now, whether or not you favorLianhuaQingwen is a litmus test on whether or not you are patriotic [in China]," Huang argues.

“While the TCM treatments [for COVID] might temporarily alleviate symptoms in some users, the explicit promotion of these medicines is more political than scientific,”as per Nicholas Thomas, a professor of global health governance at Hong Kong's City University. “The current promotion of TCM ties in with a long-running bio-nationalist campaign of supporting these types of remedies.”

The greatest risk for China's government is pushing the LianhuaQingwen tablets that many Chinese residents would consider a substitute for COVID-19 immunizations.

China's promotion of TCM may be weakening its vaccine efforts, according to anecdotal evidence.

Researchers from Hong Kong University discovered that a large number of elderly people did not get vaccinated due to a preference for TCM options like LianhuaQingwen.In a study published this week on Hong Kong's low elderly vaccination rate, only 25 percent of people over the age of 80 were fully vaccinated at the start of this year.