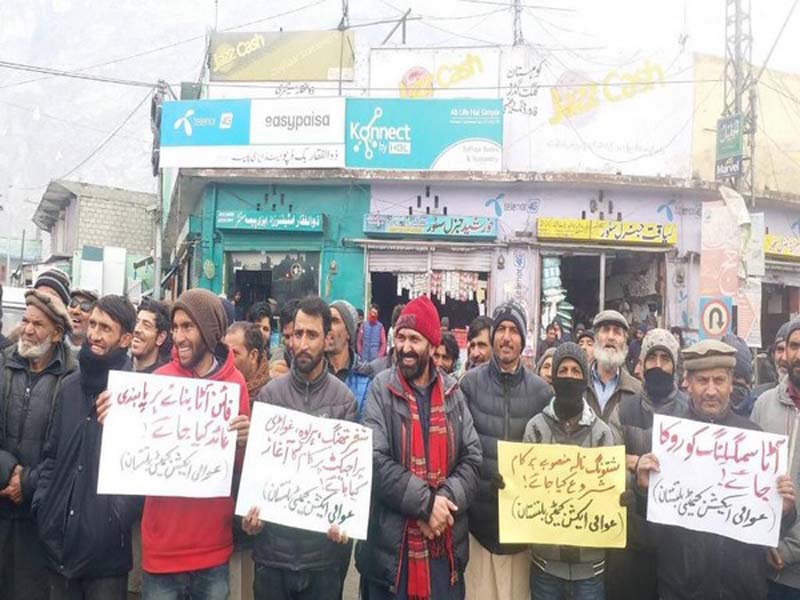 Street protests in Gilgit city and other major towns took place against the local administration, which is currently headed by the Pakistan Tehreek-e-Insaf (PTI).

It is well known that the people of Gilgit-Baltistan lack basic facilities to help them survive during the harsh winter.

Black marketing of daily essential items and corruption in this regard by the government only complicate matters, sources said.

Corruption has spread to a point where extremists are being favoured by the local administration at the behest of the Pakistan Army, the source added.

The people of Gilgit-Balistan are protesting not just their immediate grievances, but the abject failure of the Pakistani state to provide them with the basic amenities of life, in the seven decades of occupation.

Protesters blocked (11 January 2022) the roads in Gilgit city claiming that they were facing a severe shortage of wheat flour.

They said they would continue their agitation all over the region, until the wheat quota was restored and standard wheat / flour was not provided.

The Gilgit-Baltistan based Awami Action Committeealso organised a protest in Skardu against repeated and prolonged power shedding along with the crisis of food items, amidst heavy snowfall.

Speakers at the protests said the Pakistani state failed to provide the basic necessities to the people of GilgitBaltistan.

They expressed their anger against the government, both federal and local for keeping the occupied region backward and underdeveloped.

Recently, locals and activists in PoJK criticized the Federal Government for undermining the local administration and raised their voice against the close affiliation between extremists and the Pakistani Army as was witnessed during the July 2021 elections in the region.

Dr. Ashraf is an anchor for Capital TV and a local politician.

During the so-called elections (July 2021) in PoJK, Dr. Ashraf was seen openly threatening the public with weapons and was accompanied by Taliban fighters.

In another such case, Mazhar Saeed, a former associate of Tehreek-i-TalibanPakistan, a banned terrorist organization, was given a party ticket by PM Imran Khan to contest the seat reserved for Ulema and Mashaikh.

Locals have from time to time, appealed to the international community about the gross violation of their human rights by both Pakistan and Chinaand corruption in the PoJK Government.

The real challenge is the lack of economic opportunity and corruption in programmes for development.

Gilgit-Baltistan is rich in hydro-electric power, but the projects being executed by the Federal government in Islamabad with the help of China are only promoting corruption in the region.

The letter mentions the appointments of extremist elements in the PoJK administration and also reveals a situation in which a relative of a Pakistan Army General was appointed to a high ranking position in the PoJK government after breaking local regulations.

The UKPNP also drew the attention of European lawmakers on the condition of human rights and rising corruption in the region.

During the elections last year, the Imran Khan government had made several promises for the upliftment of the illegally occupied region.However, most of these remain unfulfilled till date.

In recent months, protesters have even highlighted that constant unemployment has taken a massive toll on the mental health of the population.

Additionally, the increasing rate of inflation has pushed them into debt and depression.

At the same time, Pakistan had promised the people of Gilgit-Baltistan jobs, education, and prosperity as part of the China-Pakistan Economic Corridor.

But locals  claim the policies framed by the Prime Minister Imran Khan-led government have instead altered the demographics of the region and systematically secured ownership of the land they possess to China. They even allege that the residents of Gilgit-Baltistan are not consulted while drafting such policies.

Gilgit-Baltistan is a region occupied and administered by Pakistan as an administrative territory and constitutes the northern portion of the larger Kashmir region.
This was part of the princely State of Jammu and Kashmir which legally acceded to India in October 1947.

Since Pakistan subsequently illegally captured the area, it has been looting it of its resources for over the last seven decades.

A similar situation of neglect has prevailed in the neighbouring Khyber Pakhtunkhwa Province. Pak media reports (10 January 2022) indicate that people in the province have been protesting against local authorities for the power and gas crisis that has overtaken Kohat city.

Dawn newspapers quoted a local protestor as saying that Kohat’s low pressure gas problems could be solved if half of the gas produced in Kohat could be given to the people.

Most of the gas produced in Kohat is provided to the Punjab Province.

Just how hollow Pakistan’s claims to the occupied regions being part of Pakistan recently came to light from one of its own official sources.

A subordinate organization of Pakistan’s IT ministry, Universal Service Fund (USF), refused to launch telecom projects of PoJK maintaining that the regions are constitutionally not a part of Pakistan.

In an internal letter written to the Ministry, the USF said that cellular mobile companies could object to the utilisation of the amount generated from services in POJK.

This being the case, the only unfinished agenda of Pakistan remains the return of the occupied territories to India!