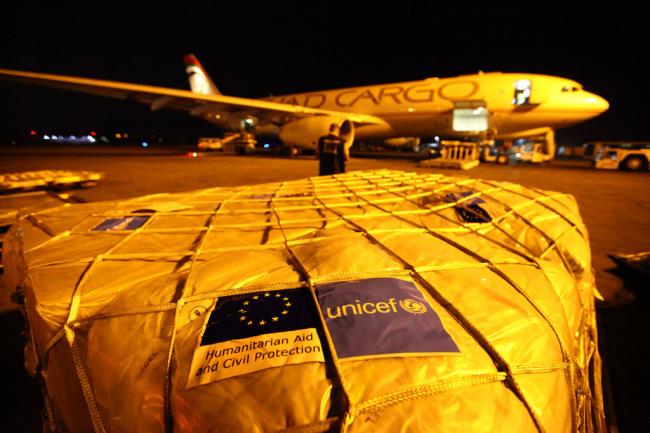 India Blooms News Service | | 06 May 2015, 09:19 am
#UNICEF, # EU begin airlift of 80 metric tonnes of humanitarian supplies to Nepal
New York, May 6 (IBNS): Humanitarian supplies to meet the emergency needs of some of the 1.7 million children affected by the April 25 earthquake in Nepal are being airlifted in to the capital, Kathmandu, as the United Nations childrenâ€™s agency works with the European Union (EU) to provide much needed relief from the effects of the disaster.

He added, “These supplies ensure the continuity of health services and keep hospitals running. These supplies will help the most vulnerable, including those injured and in need of urgent medical help.”

According to a news note released by UNICEF on Tuesday, the airlift was enabled thanks to a €400,000 contribution from the European Commission’s Humanitarian Aid & Civil Protection department (ECHO) to UNICEF’s emergency response. One flight, carrying 40 metric tonnes of life-saving supplies, has already off-loaded its cargo, while a second, carrying 40 metric tonnes more, will leave Dubai for Kathmandu this week.

The aircraft will deliver water, sanitation, and hygiene supplies, such as chlorination material, diarrhoea and cholera kits, as well as water bladders, to provide clean and safe water supplies as fears of an outbreak of waterborne diseases grow.

Also on board are health kits and tarpaulins, with many families having fled to open spaces under threat of further aftershocks.

“When a disaster strikes, help is needed fast. The EU-UNICEF partnership has been able to react quickly, delivering lifesaving supplies to those most in need even when logistics are exceptionally challenging," said ECHO Director-General Claus H. Sorensen.

He added, “Our contribution will play an important role in helping the most vulnerable communities in Nepal.”

The EU-UNICEF airlift is part of the €6 million aid package that the European Commission has made available. EU Member States have provided important financial assistance as well as offered relief items and search and rescue teams through the EU Civil Protection Mechanism.

The Commission's efforts are among the largest humanitarian contributions to UNICEF's work.

At the same time as relief supplies arrive, UNICEF is also partnering with the Nepalese Ministry of Health and Population and the World Health Organization (WHO) in an emergency vaccination drive, aiming to reach half a million children, as fears grow of measles outbreaks in the informal camps that have sprung up.

“Measles is very contagious, and can potentially be deadly, and we fear it could spread very quickly in the often crowded conditions in the improvised camps where many children are living,” said UNICEF’s Representative in Nepal, Tomoo Hozumi.

Hozoumi said, “We have been working for decades to eliminate measles in Nepal. Unless we act now, there is a real risk of it re-emerging as a major threat for children – a setback for all of our collective efforts.”

According to figures available before the earthquake struck, around one in 10 children in Nepal is not vaccinated against measles. Coupling that with the effects of lack of shelter and sanitation, which are both huge risk factors for disease, and fears of an outbreak are heightened.

In the first wave of the emergency response, teams are working to immunize children under the age of five in informal settlements in the three densely populated districts in Kathmandu Valley – Bhaktapur, Kathmandu and Lalitpur. The drive will continue in the coming weeks in the 12 districts worst-hit by the earthquake.

“We are working with partners to take urgent practical steps to mobilize tens of thousands of vaccines, as well as the cold chain facilities needed to store them at the right temperature and keep them effective,” said Hozumi.

He added, “We are doing everything possible to minimize the danger for children who have already been through so much.”