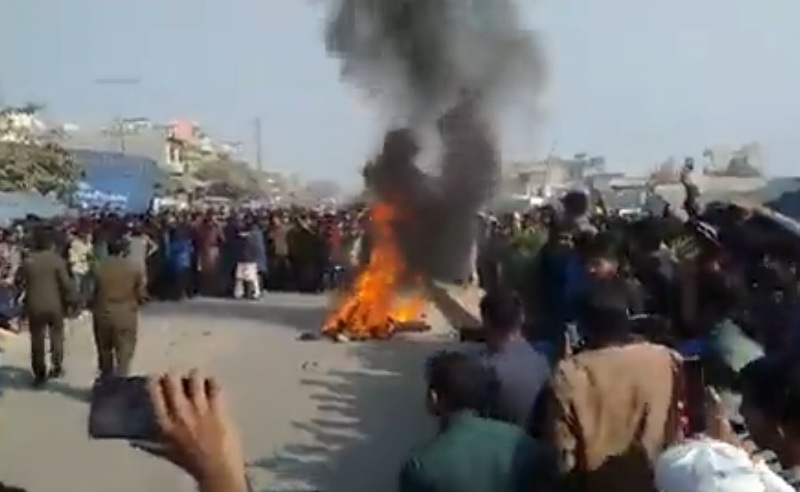 Islamabad/UNI: Pakistan Prime Minister Imran Khan on Saturday spoke with Sri Lankan President Gotabaya Rajapaksa over the phone to convey his nation’s “anger and shame” over the lynching of a Sri Lankan national over blasphemy allegations, even as Punjab police said they have arrested 120 men, including 13 prime suspects, for the brutal crime.

Imran Khan in a tweet said: “Spoke to Sri Lankan President Gotabaya Rajapaksa today in UAE to convey our nation's anger & shame to people of Sri Lanka at vigilante killing of Priyantha Diyawadana in Sialkot.

“I informed him 100+ ppl arrested & assured him they would be prosecuted with full severity of the law.”

Spoke to Sri Lankan President Gotabaya Rajapaksa today in UAE to convey our nation's anger & shame to people of Sri Lanka at vigilante killing of Priyantha Diyawadana in Sialkot. I informed him 100+ ppl arrested & assured him they would be prosecuted with full severity of the law

Meanwhile, Punjab Inspector-General Rao Sardar Ali Khan, in a press conference in Lahore, said: "During the last 24 hours, we have conducted raids in over 200 areas of the city and arrested nearly 120 men.

"These include 13 suspects whose confessional videos have been circulating on social media," he added.

On December 3, a mob of approximately 800 frenzied factory workers tortured the Sri Lankan national, Priyantha Kumara, beat him to death, and then burnt his body in the middle of the road over blasphemy allegations. Kumara was the general manager of the sports goods manufacturing unit of the factory.

Hassan Khawar, the spokesperson of Punjab, revealed that the police have obtained 12-hour CCTV footage of the attack from 100 cameras installed at the site. "We have sent the videos for a forensic examination."

He said that the post-mortem of the victim has been conducted and the body has been handed over to the Sri Lankan Foreign Ministry. "Prime Minister Imran Khan and CM Usman Buzdar are overseeing the investigations themselves."

Detailing the sequence of the events that led to the incident, IG Rao said that the DPO of Sialkot reached the site 17 minutes after receiving the first complaint.

"When they reached there, the road leading to the factory was blocked. The policemen had to walk for 15 minutes to reach the crime site. When they got there, the Sri Lankan national's body was on fire."

The inspector-general added that the entire incident took place inside the factory premises. "After the torture, the mob dragged the body of the victim out to the main Wazirabad Road and then set it on fire."

At least ten investigation teams have been formed under the District Police Officer (DPO) Sialkot and they are carrying out raids to arrest the accused who are being identified from the [viral] videos.

Khawar and Rao, in unison, promised that the people accused in the incident won't be spared "at any cost".

"We have strict orders from the PM to ensure all the suspects are arrested and brought to justice," the Punjab spokesperson said, adding that law enforcement officers, who are proven to be guilty, will be punished too.

“We have begun an impartial investigation and justice will be served in this incident."

On Friday, after the incident was reported, Imran Khan condemned the attack on Twitter. He said it was "a day of shame" for the country and everyone involved would be arrested.