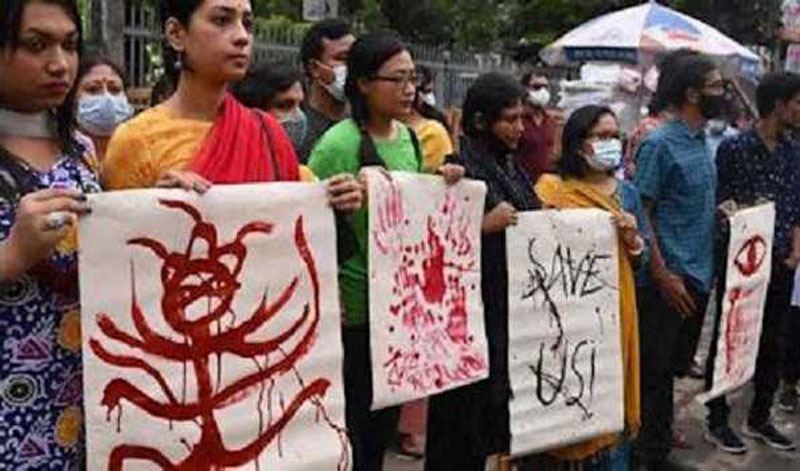 Dhaka:  Several social, political and cultural organisations have staged demonstrations and protest marches across Bangladesh over the communal violence against the minority Hindu community during the Durga Puja.

More than 200 artists, journalists, film personalities and intellectuals brought out a procession in Dhaka on Tuesday demanding justice for the sufferers of violence and punishment for the perpetrators.

They placed an 8-point demand, including immediate arrest of people involved in attacks on Durga Puja, taking steps to stop communal statements on social media and religious gatherings called Waz-mehfil among others.

Workers of the ruling Awami League brought out a rally in Dhaka on Tuesday in support of the Hindu community of Bangladesh who faced attacks during Durga Puja this year at several places like Cumilla, Noakhali, Rangpur among others.

In Rajshahi town a large gathering of people brought out a rally in the town and formed a human chain demanding punishment to the attackers on the Hindu community in the last few days of Durga Puja.

The local unit of Awami League also brought out a procession against attacks on Hindus in the country. A similar procession was also brought out by the Worker’s party at Rajshahi. Local journalist and social worker M.A. Amin said that people from all sections of society cutting across social and economic divisions took part in these protests.

On Monday students of Dhaka University protested in the University area disrupting traffic for several hours. They also demanded immediate action against the perpetrators of violence against the minority Hindu community in the country.

Prime Minister Sheikh Hasina has instructed the Home Ministry to take stern action against people who attacked the homes and temples of the Hindu community after the rumours of the desecrations of Holy Quran in a puja mandap in Cumilla town.