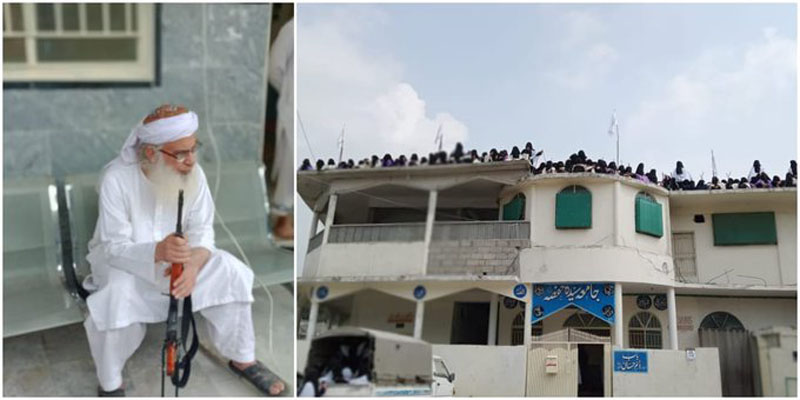 Islamabad:  The chief of Lal Mosque and Jamia Hafsa, Maulana Abdul Aziz Ghazi, hoisted an Afghan Taliban flag at the top of the seminary here, triggering unrest on Saturday.

The officials of district administration and police high-ups rushed to Jamia Hafsa at G-7/4 to remove the flags. However, Maulana Abdul Aziz Ghazi along with tens of hundreds of burqa-clad students of Jamia Hafsa showed resistance, reports The Nation.

Maulana Abdul Aziz Ghazi took up a Kalashnikov and started patrolling in the premises of the seminary along with his armed guards, the newspaper reported.

Similarly, scores of stick-wielding female students of Jamia Hafsa went on the rooftops of the seminary and started chanting slogans in favour of Islam and against Islamabad administration and police, the Pakistani newspaper reported.

Maulana was caught in a video threatening policemen.

“You should carry out raids on brothel houses running in the capital instead of storming into Jamia Hafsa where female students are getting Islamic education. Remove your uniforms and look for some other jobs. I warn you that Pakistani Taliban will soon come and ruin you,” Maulana Abdul Aziz was quoted as saying by The Nation in a  video which went viral on social media.

A local told the newspaper: "The flags were spotted before Zuhr prayers and shortly the capital administration and police were informed about it."

“Students of Jamia Hafsa also took positions on the rooftop and in the courtyard of seminary as if they were going to wage a war against police and other law enforcement agencies,” he said.

Senior officers of Islamabad administration and police reached the seminary and held talks with the authority.

The chief cleric has refused to remove the flag.

Deputy Commissioner (DC) Islamabad Hamza Shafqat told The Nation that hoisting of Islamic Emirate of Afghanistan flag in Islamabad would not be allowed and action would be taken against those found involved in violating the law.