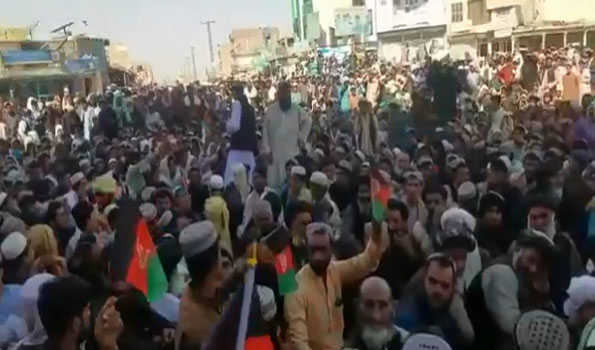 Kabul: Hundreds of Afghans staged a protest in Kandahar to condemn last week’s deadly incident at Chaman crossing between Afghanistan and Pakistan.

Afghani citizens protested in the Spin Boldak district of Kandhar province on Thursday to vent their anger against the July 31 incident where at least nine civilians were killed and 50 others were wounded due to artillery attacks by Pakistani forces on 'residential areas' of the district. After the incident, the Afghan Defense Ministry had accused Pakistani forces of shelling residential areas.

Tolonews reported that the protesters raised anti-Pakistan slogans and called on the Afghan government to reply to Pakistan in kind in case the Pakistani forces resort to a similar transgression in the future.

The Afghan Ministry of Foreign Affairs issued a statement late on Thursday evening rejecting Pakistani claims that it was Afghanistan which started shelling across the border last week, it made it clear that Afghanistan is a victim of terrorism and will never allow any terror group to stage attacks from its soil.

The Ministry of Foreign Affairs also informed that a meeting was also held between Afghan and Pakistani officials on Thursday to help prevent such incidents from taking place in the future.