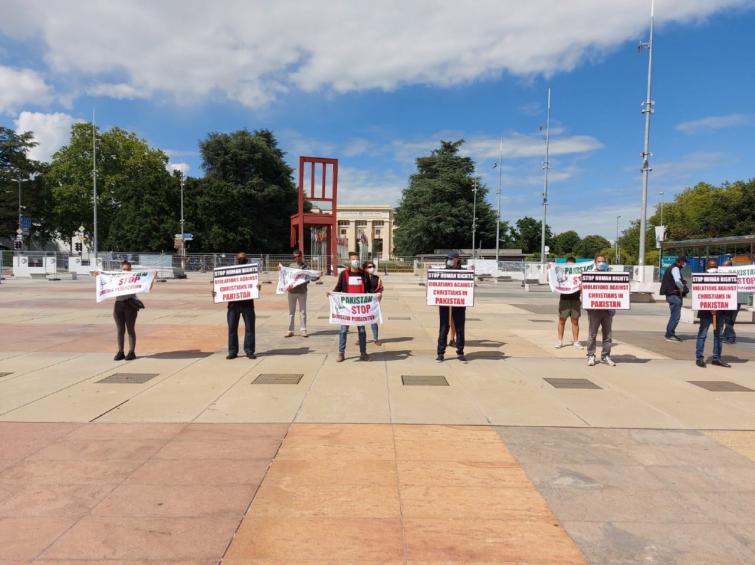 Geneva: Protest at Broken Chair highlights the plight of Christians in Pakistan

Geneva: A silent demonstration was held in front of the United Nations Office of Geneva alongside the Broken Chair to raise the plight of Christian community in Pakistan.

The protesters raised their voice in solidarity to eradicate the malicious blasphemy law and forced conversions.

The ongoing mistreatment of Christians and other religious minorities in Pakistan is an issue of immense importance that nevertheless receives scant attention from the UN or international human rights organizations.

Religious places like church have become an easy target for Christian persecution.

In the Islamic Republic, Christians, Hindus, and other religious minorities are routinely subjected to multiple forms of discrimination and harassment.

In 2020, Pakistan has ranked fifth on the Open Doors USA World Watch List of the top 50 countries where Christians are persecuted for their faith.

For example, a 22-year-old Pakistani Christian was severely tortured by a Muslim landlord in Pakistan’s Kasur district because he used the landlord’s tube-well to bathe.

Three days later, he died due to the severity of his injuries.

The country’s anti-blasphemy laws are disproportionately applied against the Christian minority—making it difficult and dangerous to live out one’s faith in public.

The message conveyed through the demonstration was loud and clear.

It urged United Nations which is currently holding 43rd session of Human Rights Council, to protect Christian women and girls who are often raped and then forcefully married to Muslim men in the community.

They also urged the UN to ensure Christians accused under blasphemy laws will not have to face violence and the Pakistani government passes laws that will protect the Christians and other religious minorities in the country.