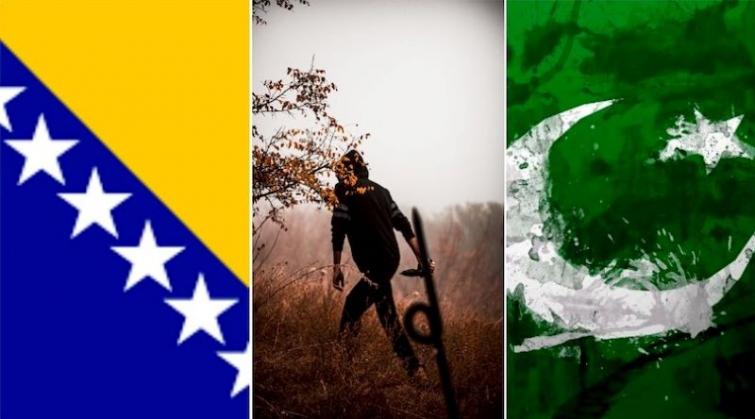 Illegal migrants in thousands from Pakistan are using the route of Bosnia and Herzegovina to make a back door entry to European Union (EU), according to a report in The Times, London.

"Thousands of Pakistani migrants appear to be using a back door through Bosnia and Herzegovina to reach the EU, creating a political and diplomatic crisis in the fractured Balkan country," the report said, adding that Bosnia has turned into a bottleneck on the people-smuggling route into Europe in recent years, with more than 9,200 people who entered the country illegally stuck there as they try to cross into Croatia.

The Bosnian border force claims that 3,000 Pakistani citizens have been fraudulently granted visas through the country’s embassy in Islamabad, enabling them to cut out a big part of the 4,000-mile people-smuggling route from Pakistan into Europe, according to the report.

It said: "To reach Bosnia, Pakistani migrants would normally have to travel overland through Iran, Turkey, Greece, Albania and Macedonia in the hands of traffickers, spending weeks and thousands of pounds in the process and risking arrest, attacks by criminals and even death. With a visa, however, they can fly from Pakistan to Sarajevo, cross the border into Croatia, an EU member, and continue their journey north on the smuggling routes."

The report said despite crackdowns over the past five years by Europol the traffickers still openly tout their business.

"One Urdu-language group on Facebook offers Bosnian visas with a phone number that customers can contact via Whatsapp, while another offers a route from Bosnia to Italy by taxi, warning that it is a 'harsh' journey to attempt on foot," the report said.

The report said the allegations of the Bosnian forces are backed by the UN refugee agency.

"They show that only about 100 Pakistani migrants arrived in Bosnia in January 2019, but that the numbers started rising sharply in the following months, even though the numbers of arrivals of other nationalities remained constant," it said.

"There was then a sharp increase in arrivals of Pakistanis in July last year, with more than 2,000 arriving that month compared with fewer than 1,000 in June. After that the numbers dropped off slightly and then fell sharply again after October," it said.

The Bosnian state prosecutor has opened an investigation into the country’s embassy in Islamabad, while Fahrudin Radoncic, the security minister, has seized on the allegations as evidence of a “security threat”, according to The Times report.

Radoncic, the report said, has been pushing to pass a law that would enable all irregular migrants, apart from Syrians, to be deported from Bosnia.

Last month he threatened to make the Pakistani ambassador to Bosnia persona non grata if he refused to co-operate, it said.

Sakib Foric, the Bosnian ambassador to Pakistan, has denied the allegations, and said that the Pakistani government was willing to repatriate its citizens if they are proved to be true.

Bisera Turkovic, the foreign minister, and Sefik Dzaferovic, the president for the Bosniak part of the country, have also backed Mr Foric and the Pakistani ambassador.

According to Geneva-headquartered  The Global Initiative, which comprises a network of over 500 independent global and regional experts working on human rights, democracy, governance, and development issues, since 2018, around 60 000 refugees and migrants have registered temporarily Bosnia.

"Why are so many migrants now being smuggled through Bosnia and Herzegovina? What has changed in the past five years to bring about this shift? How organized is this criminal activity, who is involved and what are the routes?" it asks.

It underlined the following key points:

Smuggling routes historically used to transport fuel, cigarettes and livestock are today popular paths used by migrants to cross the borders into and out of Bosnia and Herzegovina.

Border fences erected in the region (e.g. on the Hungarian–Serbian border) triggered a shift in migrant routes.

Border police are understaffed and lack the technology needed to secure the border.

Migrants who end up in Bosnia and Herzegovina find it increasingly difficult to move on, particularly to cross the border into Croatia.

Conditions in the migrant camps have been poor and overcrowding widespread.

Vulnerable migrants turn to smugglers to help them continue their journey to the European Union.
Closing the Balkan route may have reduced the number of refugees and migrants entering the EU, but it is increasing pressure on Bosnia and Herzegovina.

Greater coordination within Bosnia, cooperation between Bosnia and its neighbours, as well as support from the EU and other countries, are badly needed.