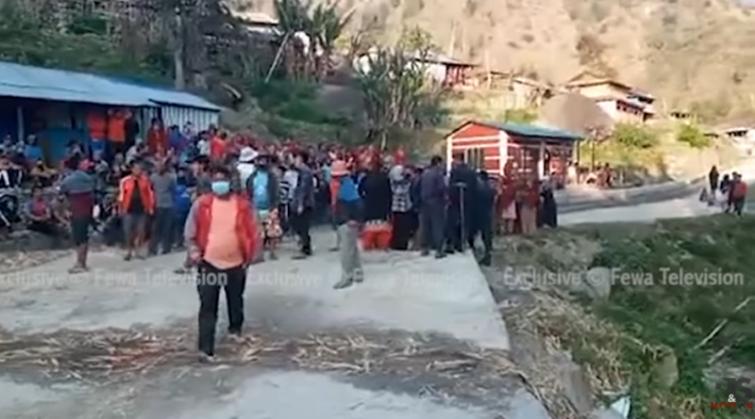 Lamjung/IBNS: Several Chinese construction workers in Nepal, who broke lockdown norms implemented by the government due to the COVID-19 outbreak in the Himalayan nation, on Tuesday clashed with locals in Lamjung district after they were asked not to break rules bringing construction materials to the village, media reports said.

The clashes between the two groups occurred when the locals protested after the two trucks laden with construction materials arrived at the Nyadi Hydropower, said Dilmaya Thapa, a representative of Ward no. 6, reported Nepali news portal Khabar Hub.

According to Nabin Kuinkel, a journalist, locals lost their temper after the under-construction hydropower brought the construction materials by clearing the barbed wire put up along the road, reported the news portal.

Locals told the news portal that the clash occurred after the Chinese workers brought the construction materials even at a time when the nation is under lockdown.

Fearing the infection of coronavirus, locals took to the streets against the Chinese nationals after they intensified their activities defying the lockdown, reported the news portal.

The police later intervened to bring the situation under control.

The Chinese workers reportedly engaged themselves in a confrontation with locals after they protested against them. The workers returned to the project site and returned with khukris ( local Nepali knives) to target locals.

The said project is being constructed by a Chinese company called Chachyang Hydropower and Installation Company.

"During the clash about 20 Chinese workers wearing helmets having lathis and khukhris were present. About 60-70 local Nepalis were present. The locals chased them away but none of them were seriously injured," sources said.

"The Administrative head of the said VDC -Basudev Gartaula is injured as the locals attacked him accusing him of issuing work pass for the Chinese," sources said.

However, the locals are demanding cancellation of work pass to the Chinese and complete halt of the work.

A local Karan Thapa told Khabarhub the Chinese took to retaliation when the local administration objected to their violation of the lockdown.

“The locals protested after the Chinese violated the government’s instruction to refrain from coming out of the house,” he said.

The police have called for a meeting between two sides to bring the situation under control.

However, the locals have complained that the incident portrays the bullish, aggressive and arrogant attitude of the Chinese, reported Khabarhub.

COVID-19, which is believed to have originated from China, has now spread across the globe.