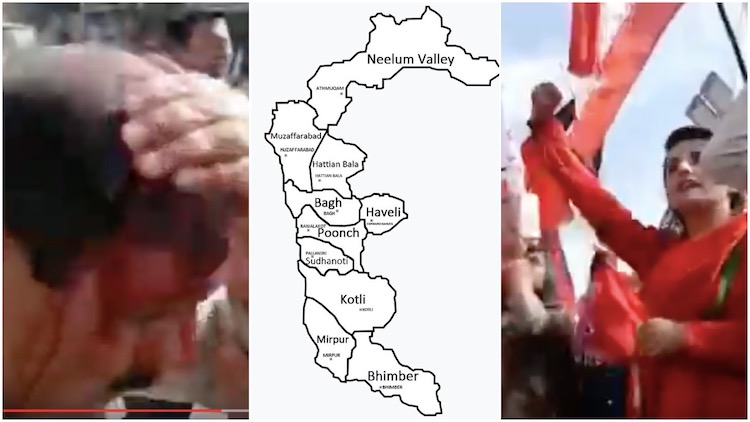 Meanwhile, curfew has been imposed in most parts of the city.

"Police have attacked and killed 4 and injured 86," sources told IBNS.

Journalists were among scores others who were arrested by the police.

"Muzaffarabad Press Club was attacked and journalists were beaten by ISI agents. Children, who were returning from schools, were teargassed," sources said as videos went viral of the protests and teargassing.

Women could be seen pouring on the streets and calling the Pakistan Army as 'hooligans and terrorists' following Tuesday's incidents in the city.

Violence hit Muzaffarabad on Tuesday when police acted to disperse a protest march, organized by a pro-freedom Kashmiri group, People National Alliance (PNA), demanding to convert the existing legislative assembly into a constitutional assembly and the unification of Gilgit region with the Pakistan-administered Kashmir.

They were stopped by the police in the front of AJK University.

A large number of women also participating in this march.

The videos posted on the social media showed, police using tear gas and batons to disperse the protesters, reported the news agency. Sounds of firing were also heard and captured on videos.

Meanwhile,  displaced persons from Pakistan Occupied Kashmir (POK) living in India on Tuesday observed Black Day to remember the sacrifices made by lakhs of Hindus, Sikhs, Muslims to defeat the invasion of the erstwhile Princely State by the Pakistan Army in 1947, often touted as the tribal invasion.

A large number of PoK DPs (displaced persons), under the banner of SOS International – an organization of PoK displaced persons- assembled at Jantar-Mantar, New Delhi and held a peaceful demonstration to mark the day amidst slogans and speeches highlighting grievances of the displaced community.

The agitating DPs were tying black ribbon on their arms and hanging placards with slogans around their neck as a mark of protest, reported Daily Excelsior newspaper.

The Jammu and Kashmir Unity Foundation (JKUF) hosted a seminar  in a series titled “Pakistan’s Military Invasion not Tribal Raid of Jammu and Kashmir" at Jammu Press Club in Jammu on Tuesday.

Ajaat Jamwal, president, JKUF, along with expert speakers spoke at length the atrocities committed by the Pakistani Army on the people of Jammu and it becomes more relevant in the present times when the Government of India took a historic decision to abrogate the regressive Article 370 and integrate the Jammu and Kashmir State fully into India, reported The Tribune.

Junaid Qureshi,  a prominent Kashmiri and director of Amsterdam-based European Foundation of South Asian Studies, tweeted: "The Blackest day in the history of Jammu & Kashmir. The day, when the Islamic Republic of Pakistan violated the sovereignty of Jammu & Kashmir, breached the signed Standstill Agreement with our Legal Ruler and invaded J&K in an attempt to illegally annex it."

He posted: "India came to J&K on the basis of a legal treaty. Irrespective of its subsequent failures and blunders in J&K along with its policy of advancing proxy politics, in strictly legal terms, India does have a legal claim. The only country among the three which has that."

The day is observed as Black Day by POK refugees in India.

The day is being observed this year at a time when India and Pakistan have been engaged in a bitter war of words over PM Narendra Modi-led government's move of scrapping Article 370 in Jammu and Kashmir.

The Article had given special status to the region.