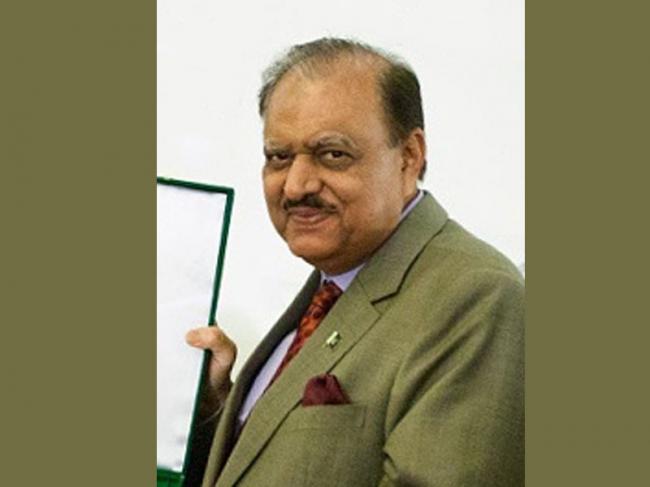 Islamabad, June 25 (IBNS): Pakistan President Mamnoon Hussain on Monday congratulated President Recep Tayyip Erdogan of Turkey on his victory in the elections held in the nation.

"On behalf of the Government and people of Pakistan, President Mamnoon Hussain has extended heartfelt felicitations to President Recep Tayyip Erdogan of Turkey on his victory in the elections held in Turkey on 24 June 2018," read a statement issued by the Ministry of Foreign Affairs in Pakistan.

The President underscored that the large turn-out and the peaceful conduct of the parliamentary and presidential elections is a testimony to the strength and vibrancy of Turkey's democratic values and institutions, read a government statement.

Turkey President Recep Tayyip Erdogan has won another five year term after been re-elected in the recently concluded elections, reports said on Monday.

He won more than 50 percent of the polls, while his closest opponent hovered around the 30 percent mark.

Though the opponents are yet to concede, they said that the fight will be on, irrespective of the results.

The officials results will be declared on Friday.

Securing the win, Erdogan thanked his supporters at 3 am on Monday.

"The winner of this election is each and every individual among my 81 million citizens," he said from the balcony of his party's headoffice.

Critics are seeing this not just another term for Turkey's longstanding leader, but one that will cement his place in the nation's politics.

Erdogan has already managed to gain Turkey's vote to strengthen his power and under a new constitution, he will be able to directly appoint top officials, including cabinet minister and vice-presidents.

According to the new law, Erdogan will have the power to intervene in Turkey's legal system and impose a state of emergency, if and when he thinks it fit.

While Erdogan thinks that the enhanced power will allow him to tackle Turkey's economic problems and fight off terrorists, commentators fear that it will create an imbalance as it's too much authority for one person alone.

Many critics have said in the past that they feel Erdogan is slowly turning Turkey into the next Pakistan biting into its long secular values upon which Kemal Ataturk founded the nation.

According to Husain Haqqani, the former Pakistani ambassador to Washington, Erdogan's actions and political thinking resembles Pakistan's military dictator between 1978 and 1988, Zia ul-Haq.

Much like Zia, the Turkish President too is pushing for the Islamisation of Turkey while pumping government money and depositing it into Islamic schools.
Opponents in the country are also worried about the significant rise of Imam Hatip religious schools. Erdogan has attended one such schools and has roots in political Islam.