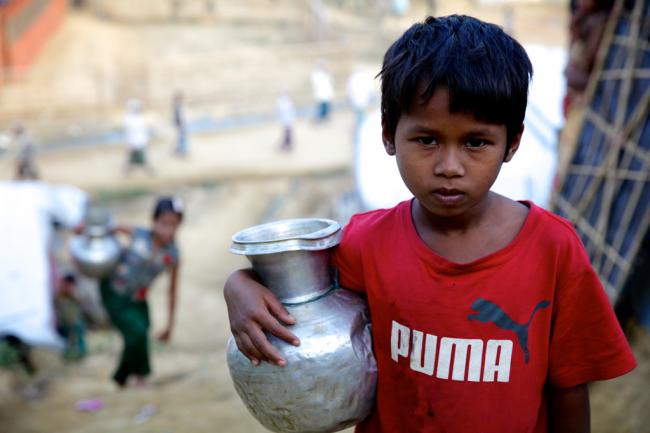 New York, Jan 17 (JEN): As the Bay of Bengal region gears up for cyclone and monsoon seasons, the United Nations Children’s Fund (UNICEF) is warning that more than half-a-millon Rohingya children already living in “horrific” conditions in makeshift settlements in Bangladesh may face compounded risks of disease and displacement.

“What is already a dire humanitarian situation risks becoming a catastrophe,” Edouard Beigbeder, the head of UNICEF programmes in Bangladesh said Tuesday, raising alarm over the impact of the approaching cyclone and monsoon seasons.

“Hundreds of thousands of children are already living in horrific conditions, and they will face an even greater risk of disease, flooding, landslides and further displacement.”

According to the UN agency, an outbreak of diphtheria in the camps has already claimed some 32 lives, including at least of 24 children, with more than 4,000 suspected cases reported.

To contain the outbreak and save lives, UN agencies, including UNICEF and the World Health Organization (WHO), and relief partners are working to vaccinate close to 500,000 children against diphtheria.

But lack of medical services and limited water and sanitation facilities in many settlements, combined with overcrowding, and growing risk of heavy rains and storms could complicate the situation even further.

“Unsafe water, inadequate sanitation and poor hygiene conditions can lead to cholera outbreaks and to Hepatitis E, a deadly disease for pregnant women and their babies, while standing water pools can attract malaria-carrying mosquitos. Keeping children safe from disease must be an absolute priority,” Mr. Beigbeder added.

Since 25 August, widespread violence in Myanmar’s northern Rakhine state has forced over 650,000 members of the Rohingya community to flee their homes and seek shelter across the border in Bangladesh. A number of UN agencies, together with humanitarian partners and the Bangladesh Government have been providing them with life-saving support.

Meanwhile, amid reports of discussions between the Governments of Bangladesh and Myanmar concerning the return of Rohingya refugees to Myanmar, the Office of the UN High Commissioner for Refugees (UNHCR) said that the returns should be voluntary.

“UNHCR underscores the importance of the dialogue between the two States at the core of which is the right of refugees to voluntarily return home,” a spokesperson for the UN agency told the press at a regular briefing in Geneva, Tuesday.

The spokesperson, Andrej Mahecic, also informed the media that some Rohingya refugees told UNHCR staff that, before considering return to Myanmar, they would need to see “positive developments” in relation to their legal status and citizenship, the security situation in Rakhine state, and their ability to enjoy basic rights back home.

“To ensure that the refugees are heard and their protection guaranteed in Bangladesh and on return in Myanmar, we are willing to be part of these discussions,” added Mr. Mahecic.

He also underscored that the comprehensive implementation of the recommendations made by the Kofi Annan-led Rakhine Advisory Commission is essential to ensure sustainable return.

These stress the importance of ensuring peace and security for all communities in Rakhine state, reducing communal divisions, and achieving solutions for the legal and citizenship status of Muslim communities, added the UNHCR spokesperson.

He also underlined the need for urgent and unhindered access across Rakhine state for UN agencies and its partners to assess the situation, provide support to those in need who and to help with rebuilding efforts.