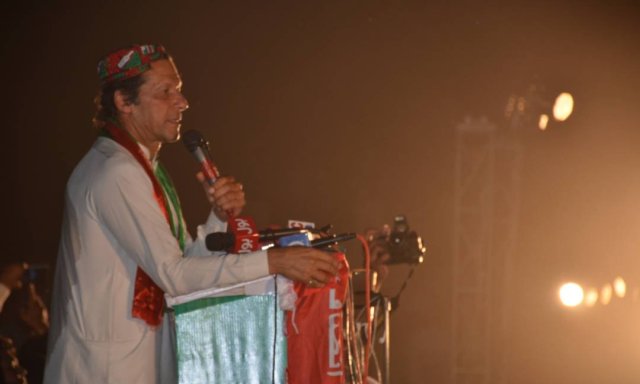 India Blooms News Service | | 22 Aug 2017, 08:25 pm
#ImranKhan, #Pakistan, #USPresident, #DonaldTrump, #Afganistan
Lahore, Aug 22 (IBNS): Cricketer-turned politician Imran Khan, who is in the run to become the next Pakistan Prime Minister, slammed the US on Tuesday for sending a message against his country on terrorism and Afganistan, media reports said.

Khan even attacked the US to say that Pakistan will never fight the former's war for them.

The former cricketer, who is the opposition leader in Pakistan, was reacting to the US President Donald Trump's blame against his country regarding the problems in Afghanistan.

Trump sent out a strong message to Pakistan over the issue of terrorism and said the Asian country has much to lose by continuing to harbor criminals and terrorists.

Trump said: "We can no longer be silent about Pakistan’s safe havens for terrorist organizations, the Taliban, and other groups that pose a threat to the region and beyond.  Pakistan has much to gain from partnering with our effort in Afghanistan.  It has much to lose by continuing to harbor criminals and terrorists."

"In the past, Pakistan has been a valued partner.  Our militaries have worked together against common enemies.  The Pakistani people have suffered greatly from terrorism and extremism.  We recognize those contributions and those sacrifices," Trump added.

"But Pakistan has also sheltered the same organizations that try every single day to kill our people.  We have been paying Pakistan billions and billions of dollars at the same time they are housing the very terrorists that we are fighting.  But that will have to change, and that will change immediately.  No partnership can survive a country’s harboring of militants and terrorists who target U.S. service members and officials.  It is time for Pakistan to demonstrate its commitment to civilization, order, and to peace," the US President added.

Blaming Pakistan, Khan said on Twitter: "We fought 2 wars in Afghanistan at the US behest paying heavy human and economic costs both times. We sacrificed 70000 Pak lives in US WOT."

We fought 2 wars in Afghanistan at the US behest paying heavy human and economic costs both times. We sacrificed 70000 Pak lives in US WOT https://t.co/la4x0M9nTW

The former Pakistani cricketer even attcked the US for making his country scapegoat. "We must also reject being made scapegoats for the policy failures of the US and India."

We must also reject being made scapegoats for the policy failures of the US and India. https://t.co/iDSohH1fOS

India has welcomed US President Donald Trump's speech where he spoke about his administration's new Afghanistan strategy and even attacked Pakistan for giving 'safe haven to agents of chaos, violence, and terror'.

In a statement, appreciating Trump's remarks, MEA spokesperson Raveesh Kumar said: "'We welcome President Trump’s determination to enhance efforts to overcome the challenges facing Afghanistan and confronting issues of safe havens and other forms of cross-border support enjoyed by terrorists. India shares these concerns and objectives."

"We are committed to supporting the Government and the people of Afghanistan in their efforts to bring peace, security, stability and prosperity in their country. We have been steadfast in extending reconstruction and development assistance to Afghanistan in keeping with our traditional friendship with its people. We will continue these efforts, including in partnership with other countries," he said.