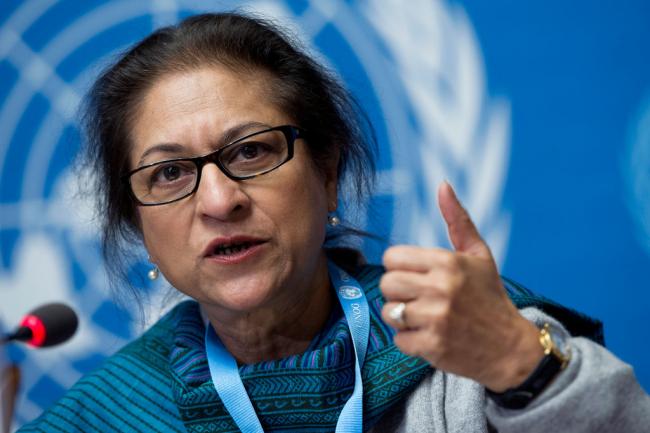 India Blooms News Service | | 10 Jan 2017, 08:18 am
#Iran, # UN, # prisoners, # risk of death, # prolonged hunger strike
New York, Jan 10 (Just Earth News): Raising alarm over the health of several prisoners of conscience in Iran, who have been on a prolonged hunger strike contesting the legality of their detention, the United Nations expert on the human rights situation there urged the authorities to â€œimmediately and unconditionallyâ€ release all those who have been arbitrarily arrested, detained and prosecuted for exercising their rights.


According to the UN human rights office, two of at least eight protesting prisoners of conscience have been on hunger strike since October last year. One of the two ended his strike last week after his wife (Golrokh Ebrahimi Iraee, a human rights defender) was granted bail.

Another protester – Mohammed Ali Taheri – started his strike on 28 September. However, his whereabouts have been unknown since his reported transfer to Baghiatollah Military Hospital in October.

Furthermore, at least one of the protesters – Arash Sadeghi, another human rights defender – is being denied transfer to specialized medical facilities despite his critical health condition and is reportedly kept in his cell.

“I call on the Iranian authorities to ensure that  Sadeghi has access, as a matter of utmost priority, to specialized health care in a hospital outside prison, in compliance with international human rights standards and medical ethics in particular the principles of informed consent,” stressed Asma Jahangir, the UN Special Rapporteur on the human rights situation in Iran.

She also expressed deep concerns over the continuous detention of human rights defenders in the country, who, she said “have been tried on the basis of vaguely defined offences and heavily sentenced following trials marred with due process violations.”

“They are left with no other option but to put their life at risk to contest the legality of their detention,” Jahangir added.

She further pointed out that such a situation persists just a few days after Iran’s President, Hassan Rouhani, signed the Citizen Rights Charter, which enshrines the rights to life, to freedom of opinion, expression and assembly in the country.

The UN Special Rapporteur on the situation of human rights defenders, Michel Forst, and the Chair-Rapporteur of the UN Working Group on Arbitrary Detention, Roland Adjovi, have endorsed  Jahangir’s call.

Independent experts and Special Rapporteurs are appointed by the Geneva based UN Human Rights Council – an inter-governmental body responsible for promoting and protecting human rights around the world – to examine and report back on a specific human rights theme or a country situation. The positions are honorary and the experts are not UN staff, nor are they paid for their work.