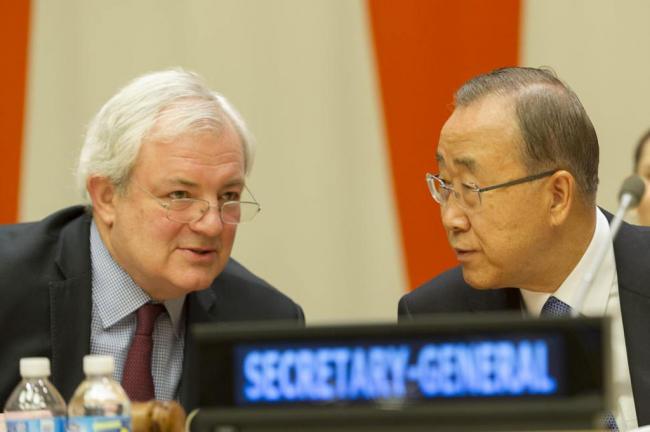 Global humanitarian needs have quadruple over the years, leaving more than 128 million people in need of assistance today. The ever-increasing scale and intensity of emergencies points to the need for a larger, more robust CERF to address the growing needs.

“That is why, in my Agenda for Humanity I asked to expand the CERF’s annual funding target to $1 billion dollars by 2018,” the Secretary-General told a High-Level Pledging Conference at UN Headquarters.

Humanitarian needs now stand at a record $22.2 billion dollars. With the rapid growth in scale and intensity of suffering coupled by protracted conflicts projected to continue to drive mass displacement, demands on CERF had to increase.

“Beginning this year, all Member States have begun to act on their solemn pledge ‘to leave no one behind.’ The success of the 2030 Agenda for Sustainable Development is inseparable from our success in assisting the most vulnerable and the hardest to reach,” explained Mr. Ban.

“The scale of humanitarian deprivation is greater than at any time since the United Nations was founded,” he continued. “A record 130 million people need humanitarian assistance to survive,” he added, pointing out that together, they would form the tenth most populous nation on earth.

The UN chief laid out the situation, saying “Sixty-five million men, women and children have been forced to flee their homes as a result of armed conflict, instability and persecution. Forty million of them are displaced within their own countries. The success of the 2030 Agenda for Sustainable Development is inseparable from our success in assisting the most vulnerable and the hardest to reach.”

Over the past two years, close to 70 per cent of CERF contributions have targeted responses supporting the world’s most vulnerable displaced people and their host communities.

Last week, on 8 December, the General Assembly endorsed the Secretary-General’s recommendation for an increase. Encouraged by Member States “resounding vote of confidence in the CERF,” Mr. Ban thanked the donors that had already increased their financial commitments, saying “A strong United Nations needs a strong CERF.”

While a $1 billion CERF means that tens of millions more people will receive timely life-saving food, medicine, water, shelter and protection, the Secretary-General pointed out that the cost was “a bare minimum for the world we live in.”

Mr. Ban urged not to succumb to donor fatigue, stressing that “the world has the wealth to come to the aid of every single person in dire straits.”

He painted a true picture of fatigue, saying “Fatigue is the family in a refugee camp year upon year, unable to return home because of chronic violence. It is the girl whose education has been put on hold, the slow pace of rebuilding after an earthquake, or the neglect that sets in when the media spotlight moves on to the next crisis. Fatigue is yet another military budget going up, and spending on basic needs going down.”

“So,” he continued “let us get our funding priorities straight, and put the most vulnerable first.”

When the General Assembly established CERF as a global fund ‘by all, for all,’ it marked a breakthrough in humanitarian funding. It was designed to provide fast and predictable funding to people affected by conflicts and crises, no matter where they were.

Since then, CERF has disbursed $4.6 billion dollars to 98 countries, within hours of an emergency occurring.