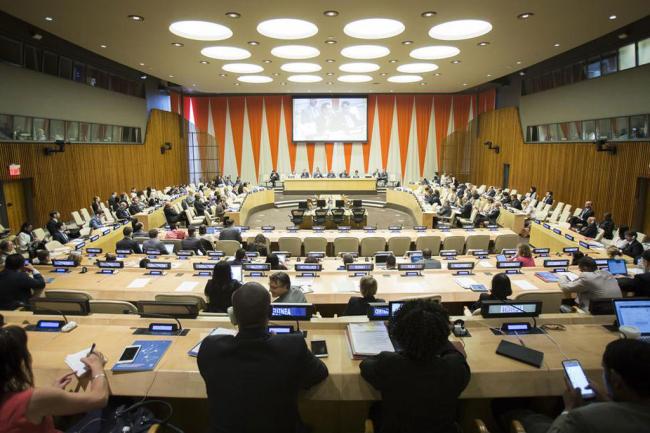 India Blooms News Service | | 28 Jun 2016, 10:07 am
#UN, #Humanitarian crisis, #Ban Ki moon
New York, June 28 (Just Earth News):The international community must act with urgency and solidarity to deliver on the commitments generated at the World Humanitarian Summit in Istanbul, Turkey, this past month, in order to adequately respond to and prevent crises and build resilience on a global scale, senior United Nations officials emphasized on Monday.

“There is no room for delays; every day and week counts,” Deputy Secretary-General Jan Eliasson said at the opening of a UN Economic and Social Council (ECOSOC)Humanitarian Affairs Segment on the World Humanitarian Summit at UN Headquarters in New York today.

“During the five weeks since the Summit, thousands of people have been killed in conflict,” he added. “Tens of thousands have been forced from their homes. Thousands of farmers and pastoralists have given up hope of making a living on land destroyed by drought, floods or sea level rise, related to climate change.”

The annual ECOSOC Humanitarian Affairs Segment provides a platform for Member States, UN entities, humanitarian and development partners, the private sector and affected communities to discuss emerging and pressing humanitarian issues, as well as activities and issues related to strengthening the coordination of the UN’s humanitarian assistance.

This year’s session – which starts today and runs through Wednesday – follows the first-ever World Humanitarian Summit, which brought together between 23-24 May representatives from some 180 Member States, 55 Heads of State and Governments, 350 private-sector representatives and more than 2,000 people from civil society and non-governmental organizations, and culminated in some 3,000 commitments to action for improving the humanitarian system and alleviating the suffering of millions.

At today’s meeting, the Deputy Secretary-General recalled that Secretary-General Ban Ki-moon had said that global commitment to humanitarian action is one of humanity’s highest moral achievements, and that upholding compassion and human dignity is one of the greatest global challenges of our time – and perhaps more urgent than ever in today’s world.

“Record numbers of people are in need of humanitarian assistance and protection. At the same time, there is a tangible sense of fatigue, even resignation, manifested in the greatest shortfalls ever in the funding needed,” Mr. Eliasson said.

Partly for this reason, the UN official said, the Secretary-General had convened the World Humanitarian Summit and presented his Agenda for Humanity, which outlines five areas for collective action – including preventing and ending conflict; respect for the rules of war; leaving no one behind; working differently to end needs; and investing in humanity – to reduce humanitarian needs.

Noting that the Summit marked a clear demonstration of leadership and political will, the Deputy-Secretary-General encouraged leaders to continue along that path, and to not be complacent.

“Despite many affirmations, there were few concrete commitments on preventing and ending conflict. We must work to turn words into action, if we want to make a real difference for millions of refugees and civilians caught up in conflict,” he said.

Among the next steps to be taken – including by the UN family – include the implementation of commitments, the development of initiatives and alliances, and the turning of pledges of support into action, the Deputy-General said, adding that all actors should be prepared to engage for the long term.

“We aim to strengthen your understanding of the solutions outlined in the Agenda for Humanity, and to work with you to secure your continued commitment. The country ownership is a central concept,” Mr. Eliasson said.

“It is vital that we continue to champion the five core responsibilities and to concretely live up to them. Limited improvements will not be sufficient for the scale of change that is needed,” he added.

The Deputy-Secretary General also emphasized the necessity to “break out of our silos,” such as by finding new levels of cooperation and working together for change.

In that regard, he indicated that the ECOSOC High-Level Political Forum on Sustainable Developmentin July, the General Assembly High-Level Meeting on Large Movements of Refugees and Migrants on 19 September, and the Habitat III Conference in October are opportunities to build on the Summit’s achievements.

The Deputy Secretary-General also emphasized that periodic assessments will be important as a follow-up to the Summit, and to fulfil the pledge of the 2030 Agenda for Sustainable Development to leave no one behind.

Eliasson noted that the Secretary-General, in his upcoming report on the Summit, will propose ways to maintain the momentum and to advance the Agenda for Humanity and its core responsibilities, and urged participants to actively cooperate in that regard.

Also speaking today was the Under-Secretary-General for Humanitarian Affairs, Stephen O’Brien, who underscored that, since December 2015, humanitarian needs have soared even higher, with 130 million people in 40 countries now needing assistance just to survive.

Presenting the Global Humanitarian Overview Status Report for 2016, Mr. O’Brien, who also serves as the UN’s Emergency Relief Coordinator, said that the UN-coordinated inter-agency humanitarian appeal is calling for $21.6 billion to alleviate the suffering of the most vulnerable 95.4 million around the world.

“In other words, since the beginning of the year another 5.5 million people’s lives have been torn apart, their survival and safety thrown into jeopardy,” he said.

The Under-Secretary-General attributed the spike largely to two sudden onset disasters: the cyclone in Fiji in February and the earthquake in Ecuador in April, as well as to the repercussions of the El Niño weather phenomenon, which has led to droughts in Ethiopia and Zimbabwe.

Noting the generosity of donors, Mr. O’Brien said that appeals in 2016 had generated $5.5 billion in funding thus far – the highest amount ever received in mid-year. Nonetheless, a funding gap of $16.1 billion remains.

“The grim truth is this: this appeal is just one quarter funded,” he said, adding that demographic growth, protracted conflicts and an increase in the intensity of natural disasters linked to climate change will inevitably continue to drive up needs.

Pointing to crises in the Lake Chad Basin, the Central African Republic and Myanmar, the Under Secretary-General called on leaders to support the funding appeal.

“This appeal will support millions of mothers to feed their malnourished children. It will help doctors give lifesaving care to children injured by bombing. It will help pastoralists keep their cattle alive. And it will help protect women and girls from sexual abuse and violence,” Mr. O’Brien said.

“Human organizations are committed to bringing relief to people in critical need but they cannot do it alone: they need predictable, flexible and adequate funding,” he added.