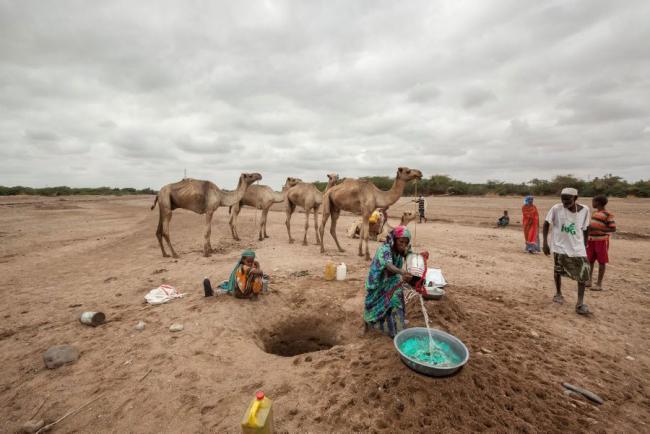 India Blooms News Service | | 12 May 2016, 07:43 am
#drought, #northern Somalia, #UN
New York, May 12 (Just Earth News/IBNS): A senior United Nations humanitarian official in Somalia on Wednesday called for urgent action to support drought-stricken communities in Puntland and Somaliland and avert a further deterioration of the situation.

The drought has impacted lives and livelihoods, compounding an already challenging humanitarian situation. In some areas, 60-80 per cent of herds have been lost, with devastating impact on families who depend on livestock for income, food and status.

“I am deeply concerned about the devastating effects of the persisting drought on the communities in Puntland and Somaliland,” said Peter de Clercq, the Humanitarian Coordinator for Somalia, following his recent visit to those areas. “If we can vaccinate livestock and provide cash and inputs to agro-pastoralists now, we can mitigate the impact of the current drought.”

Nearly 385,000 people in Puntland and Somaliland facing acute food insecurity while an estimated 1.3 million people are at risk of slipping into acute food insecurity if they do not receive assistance, according to the UN Office for the Coordination of Humanitarian Affairs (OCHA). Overall, roughly 1.7 million, or 37 per cent of the 4.6 million people there, need some form of humanitarian assistance.

Even though recent rains have brought an end to the drought in some areas, the crisis remains of serious concern given the cumulative impact of up to four failed rainy seasons in some areas. If the rains stop earlier than the end of May or early June, the situation could deteriorate rapidly and deeply,  de Clercq said.

In March, the Humanitarian Coordinator launched a call for aid requesting $105 million to boost the drought response. Priority is given to putting cash in people's pockets to enable recovery of livelihoods for both pastoralists and agro-pastoralists. Assistance to pastoralists includes a broad spectrum of animal health support, such as vaccinations and possible restocking in the future. Agro-pastoralists are also provided with seeds and tractor hours.

During his visit,  de Clercq met with representatives of the government, donors, humanitarian partners and affected communities to assess the impact the current drought and ongoing response by partners. The visit was also part of an initiative to find solutions for the 1.1 million Somalis in protracted displacement across the country.