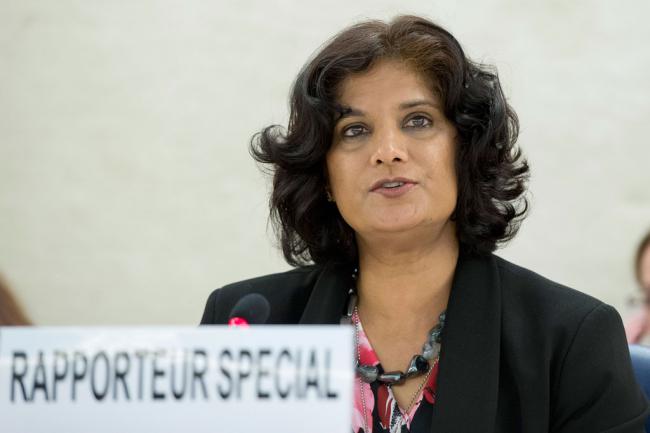 “All measures should include children forced do hazardous work, children forced to conduct illicit activities for gangs and girls and women forced into sexual slavery by gang members,” said Urmila Bhoola, UN Special Rapporteur on contemporary forms of slavery at the end of her first official visit to the country.

“These forms of slavery are both a cause and consequence of poverty, social exclusion, internal and external displacement of communities, as well as crime,”  Bhoola said, stressing that “protecting the human rights of victims of slavery is of paramount importance as they are often the most vulnerable and discriminated against with women and children invariably being amongst the most severely affected.”

The Special Rapporteur noted that a comprehensive legal framework exists in the country that penalizes slavery and slavery-like practices, and praised the positive progress made by stakeholders.

“Such progress was most clearly noted in the reductions in the number of children engaged in the worst forms of child labour and their reintegration into schools,” she said. “However, prevention and protection of victims through robust and effective law enforcement remains a key challenge.”

During her visit, the Special Rapporteur identified a number of issues of concern in the current context of escalating gang-related violence. She was deeply shocked to hear of the forced recruitment of children as young as 9 years old into such gangs, as well as coercion of girls, adolescents and women into participating in sexual activity with gang members, including as so-called “brides” of gang members forced to conduct conjugal visits with them in prison.

“Such activities prima facie constitute contemporary forms of slavery and are prohibited in international human rights law,”  Bhoola noted. “As such the Government is obligated to take measures to eliminate these practices, prosecute perpetrators and provide effective access to justice and redress to victims whose rights have been violated.”

“Protection and prevention measures are necessary as an immediate solution to address the high incidence of these crimes and the violence that occurs when victims refuse to comply with demands made by the gangs,” she added.

In this context, the Special Rapporteur noted that the Government has developed a comprehensive plan to address the high levels of criminal violence that occur as a result of gang-related activity, and commended the “El Salvador Seguro” plan that has the support of all key stakeholders.

“I strongly urge the Government to play close attention to avoiding any criminalization of victims, particularly children and women, who have been subjected to slavery-like practices that force them into criminal behaviour,” she stated.

The expert also expressed concern about other forms of contemporary forms of slavery and slavery-like practices in El Salvador, including continuing child labour in hazardous and dangerous work, forced labour conditions for workers in a number of sectors, including those producing garments in factories known as “maquilas,” home-based embroiderers, and those working in private security services, children being forced to beg or perform in the streets, and situations of domestic servitude.

Bhoola visited San Salvador and labour sites and communities in Usulután, Puerto El Flor and Puerto Parada, where she met with a broad range of national and local government officials. She also met with the Human Rights Ombudsman, a range of coordination bodies, representatives from the legislature, the Supreme Court, UN agencies, NGOs working on issues relating to her mandate, trade unions, private-sector representatives, and individuals affected by slavery-like conditions of work.

The independent expert will present a report containing her conclusions and recommendations to the UN Human Rights Council in September 2016.