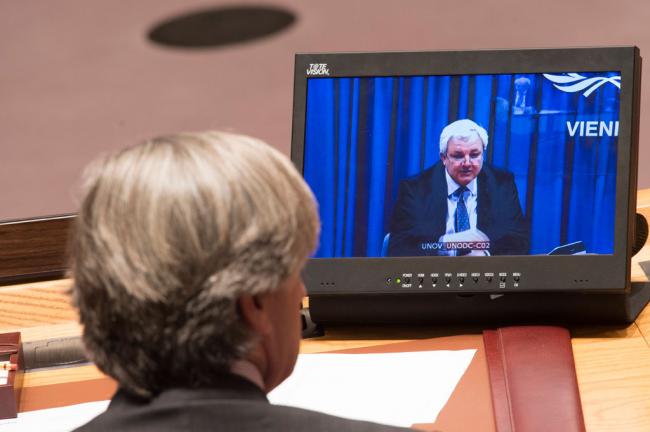 India Blooms News Service | | 29 Apr 2016, 08:12 am
#Syria, #Security Council
New York, Apr 29 (Just Earth News/IBNS): With hundreds of thousands of civilians killed, millions of people displaced and countless families torn apart, the UN relief chief on Thursday described the human toll and suffering in Syria as â€œsickening,â€ and said the global community should be â€œashamedâ€ that this is happening on its watch.

“It does not require me to say to each and every member of the Security Council, that the impact of five long years of conflict in Syria defies understanding, let alone its description,” Stephen O’Brien, the UN Under-Secretary-General for Humanitarian Affairs, told the 15-member body during a monthly humanitarian update.

O’Brien’s update came as UN Secretary-General Ban Ki-moon condemned yesterday’s aerial strikes against Al Quds hospital in Aleppo. According to a statement issued by his spokesperson, civil society groups report at least 20 people were killed as a result of the attack, including three children and the area's last paediatrician.  expressed his deep condolences to the bereaved families.

“The Secretary-General also reiterates his condemnation of recent indiscriminate shelling by Government forces and opposition groups, as well as terrorist tactics by extremists. Attacks that target civilians are inexcusable violations of international human rights and humanitarian law. There must be accountability for these crimes,” the statement underscored.

Calling on the warring sides in Syria to immediately renew their commitment to the cessation of hostilities, the UN chief in his statement encouraged the International Syria Support Group (ISSG), in particular its two co-chairs, Russia and the United States, to exert pressure on all concerned to stop the fighting and to ensure credible investigations of incidents such as the attack on Al Quds hospital.

‘Life is miserable’ in Syria

In his briefing to the Council,  O’Brien, who is also the UN Emergency Relief Coordinator said that for many who are merely surviving, “life is miserable.”

“Deliberately deprived of food and medicine, many face the most appalling conditions of desolation, hunger and starvation. We must all be ashamed that this is happening on our watch,” he lamented.

O’Brien noted that the recent cessation of hostilities has provided a much needed moment of respite for some of those who are suffering in this terrible conflict. But the recent developments on the ground “show a substantial and worrisome deterioration, not least with increase of violence reported in Aleppo, Homs, Idlib, Lattakia and rural Damascus.”

Just this morning Syrian Government forces are reported to have restarted using aerial bombardment in Dar'a Governorate for the first time since the start of the cessation of hostilities, the UN official noted.

“It is the duty of the Security Council to ensure that every possible avenue is explored to end the violence. I reiterate the call for sustained, safe, unconditional and unimpeded access for humanitarian assistance. The parties to the conflict, the Security Council, and the co-chairs of the ISSG [International Syria Support Group] must exert every effort to revive the cessation of hostilities,”  O’Brien stressed, echoing the Secretary-General on the need for the Group – comprised of the United Nations, the Arab League, the European Union and 18 countries and which has been seeking a path forward for several months.

“You must not squander the opportunity presented by talks in Geneva and by the cessation in hostilities to put an end to the massive human suffering in Syria. The world and the people of Syria need this. They need your action,” he added.

Despite the enormous challenge – such as the increased targeting of hospital and health facilities – UN personnel on the ground and humanitarian partners have continued to deliver lifesaving assistance and support to millions of people across the country.

According to the UN relief chief, the World Food Programme (WFP) has reached 3.7 million people with food aid in March. The UN Children’s Fund (UNICEF) and the Wold Health Organization (WHO) held a nation-wide polio campaign in March reaching over 2.1 million children. This week, UNICEF, WHO and partners began another immunization campaign to reach two million children in besieged, hard-to-reach and under-served areas.

In addition, he told the Security Council that humanitarian cross-border convoys this year are reaching nearly twice as many people compared to the same period last year, with convoys having provided food aid to over one million people this March alone. Relief also continues to reach civilians through cross-line inter-agency operations, with 21 convoys deployed in March, and 24 operations having proceeded already in April.

According to estimates by the UN Office for the Coordination of Humanitarian Affairs (OCHA) – which  O’Brien leads – since January, assistance has been provided to 778,175 people in need in besieged, hard-to-reach and other priority cross-lines locations.

Meanwhile, since 10 April, WFP has led and carried out 14 high altitude airdrops to those cut off by the Islamic State in Iraq and the Levant (ISIL/Da’esh) in Deir ez-Zor city, meeting the immediate needs of some 100,000 people. The Syrian Arab Red Crescent (SARC) is now distributing the assistance on the ground. While airdrops are used only as a last resort, with the support of many Member States, WFP is able to continue the operation to send food as well as other humanitarian supplies, such as medicine, nutrition, water and sanitation supplies.

However,  O’Brien said he remains particularly concerned about reaching areas where complete access has been regularly denied. The UN has submitted the inter-agency convoy request for May to reach 35 towns in critical need. “I call on access to be granted without delay, including to Darayya and Douma. As has been reported many times, these areas are in desperate need of humanitarian aid,” he underlined.

“International humanitarian law is very clear on medical treatment. The sick and wounded must be given the medical care required by their condition. Medical personnel must be protected in all circumstances. And attacks against medical facilities are prohibited,”  O’Brien stated.

Despite these rules, he informed the Council that the withholding of medical treatment continues to be used as a weapon of war in Syria; OCHA is still receiving reports of parties to the conflict ignoring these basic tenets of international humanitarian law, including the removal of medicine and medical supplies from aid convoys.

“This week, on the convoy to Rastan, the Syrian authorities removed medicines from supplies, and scissors and anaesthetic medicines from midwifery kits. This inhumane practice directly leads to unnecessary suffering and loss of life. We must continue to press the Syrian Government to allow the delivery of medical supplies. This is not idle [talk] – it can be proved – and be in no doubt it will be when one day there is no more fighting and those responsible are held to account – and they will be. There can never be impunity for this behaviour,”  O’Brien said.

Concluding his remarks, he said the people of Syria cannot afford to see the situation move backwards again: “If the international community fails to maintain political momentum, with a sustained cessation of hostilities, and without full humanitarian access, the situation can and will only spiral further out of control. The international community simply must not let the chance we have on Thurssday slip away. Frankly, I am not sure just how many more days or weeks or months the long-suffering people of Syria can endure this protracted humanitarian catastrophe.”